With all of the success that Boost has brought adidas Running and adidas Originals, the brand’s basketball imprint is still leagues behind the juggernaut that is Nike Basketball. How times have changed, the boost has been not change a lot since the adidas Crazy Explosive 2016 released.

But now we will checked it as below : 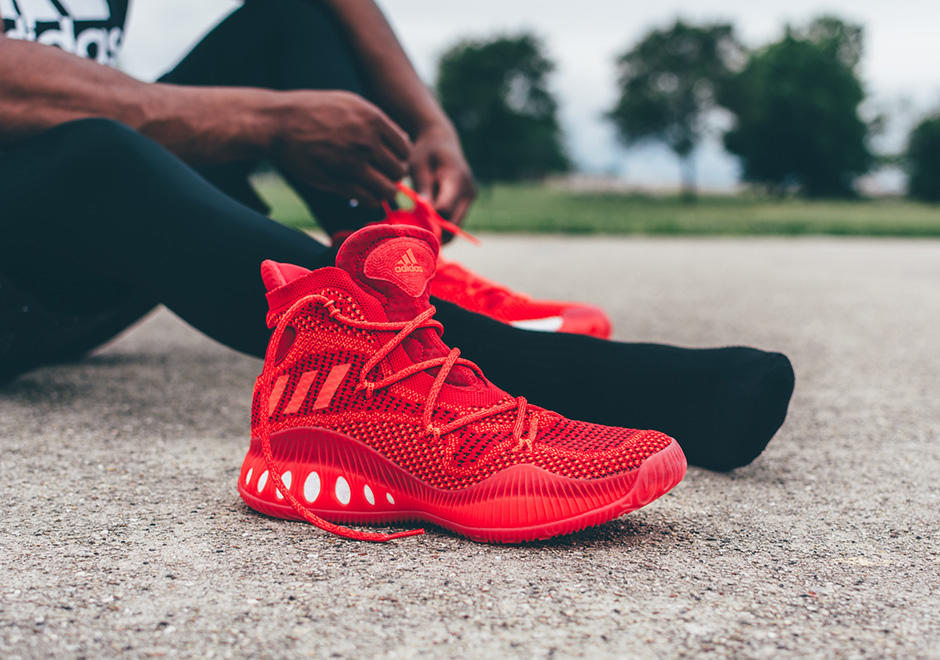 As the best cushioing and comfort material, Crazy Explosive has been popular ,especially in the 2016 ,, because of released by Crazy Explosive Low, it has been more choice for a lot of player. 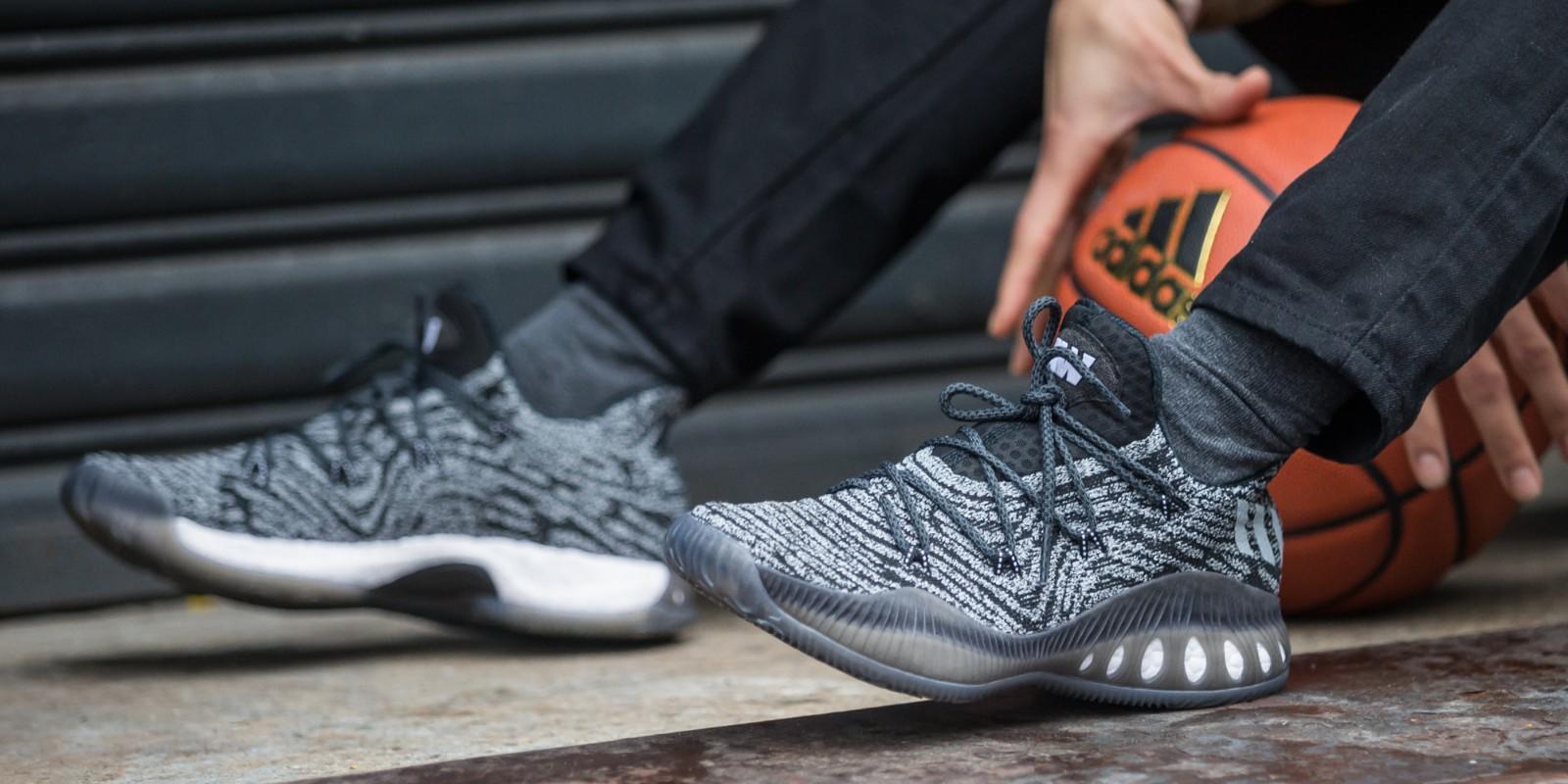 And today we are going to see the latest Crazy Explosive 2017 Primeknit. 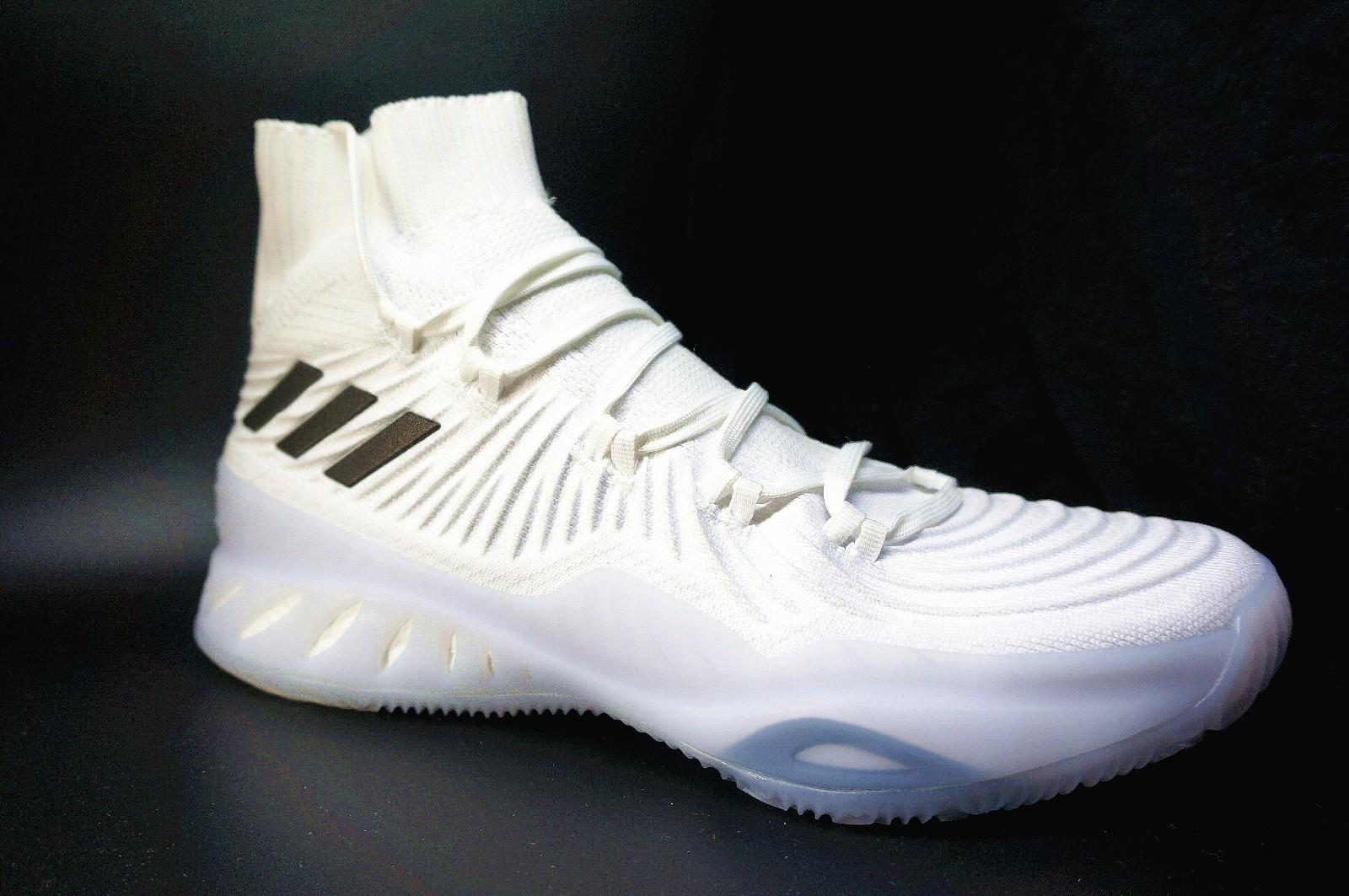 It’s not too hard to see why with the Swoosh’s signature athletes ranging from LeBron, KD, Kyrie, and Paul George. But that might all change soon thanks to the upcoming adidas Crazy Explosive 17, a shoe that we’re excited to see both on and off the court thanks to a sleek woven Primeknit upper which more comfortable and stability.

As you can see, all of TPU waves surround that reinforce the whole Primeknit bootie without compromising comfort and sctrechibility by a lot. 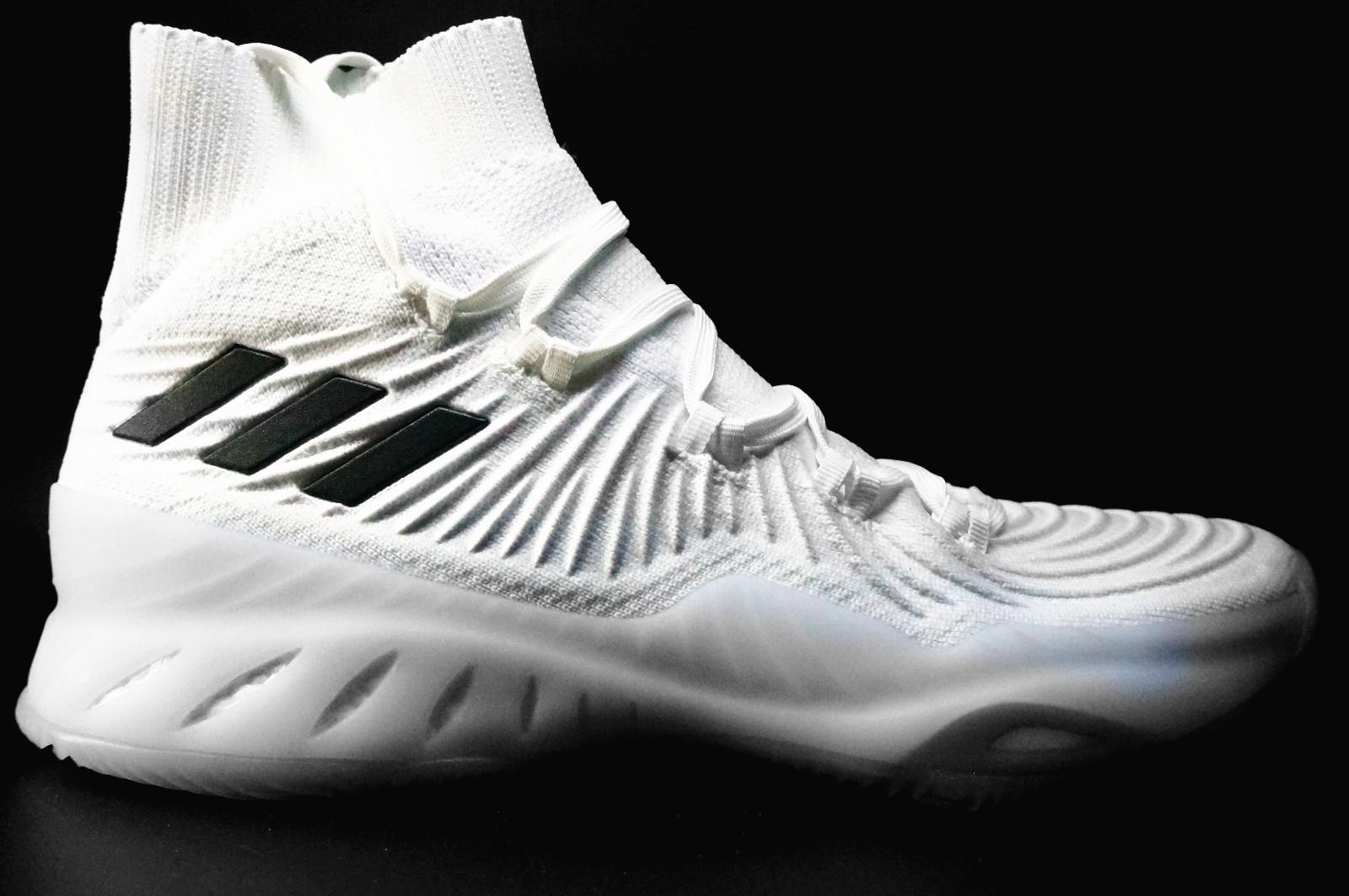 Though the material of Primeknit support , but there are a lot of foam the inside of  which more comfortable and providing.And the form will be surround the heel parts  will more protection even without the TPU .So you will feel more comfortable because of the foam inside. 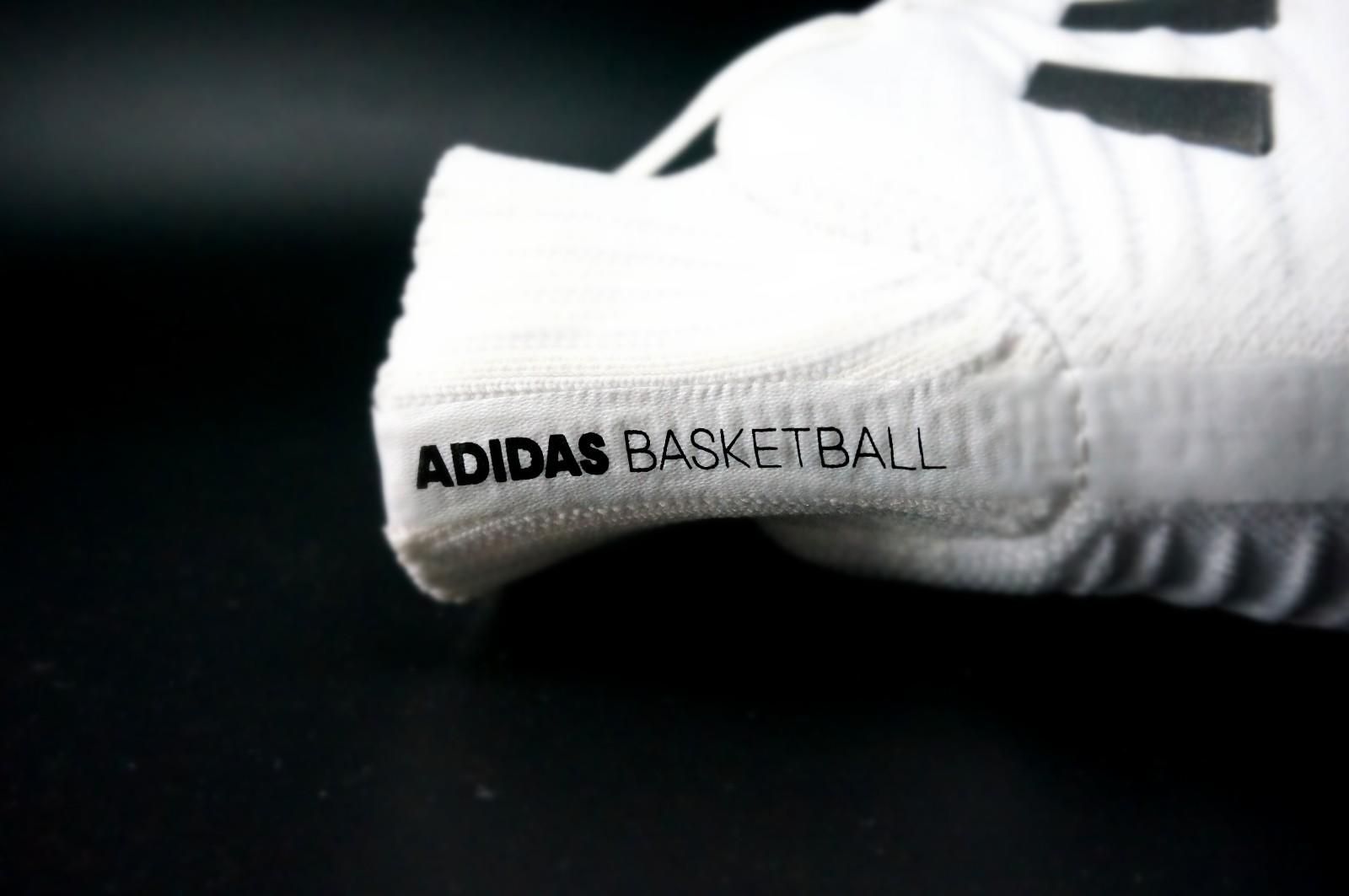 Compare with the Crazy Explosive 2016, the Crazy Explosive 2017 will be more stiff, because of a lot of player said the upper of 2016 will be soft,so in order to make the shoes balance ,the 2017  now a tad bit stiffer because of this TPU yarn, but I didn‘t notice any big of a deal. It still keeps the comfort level & stretchiness on a highest level by adding much needed support. 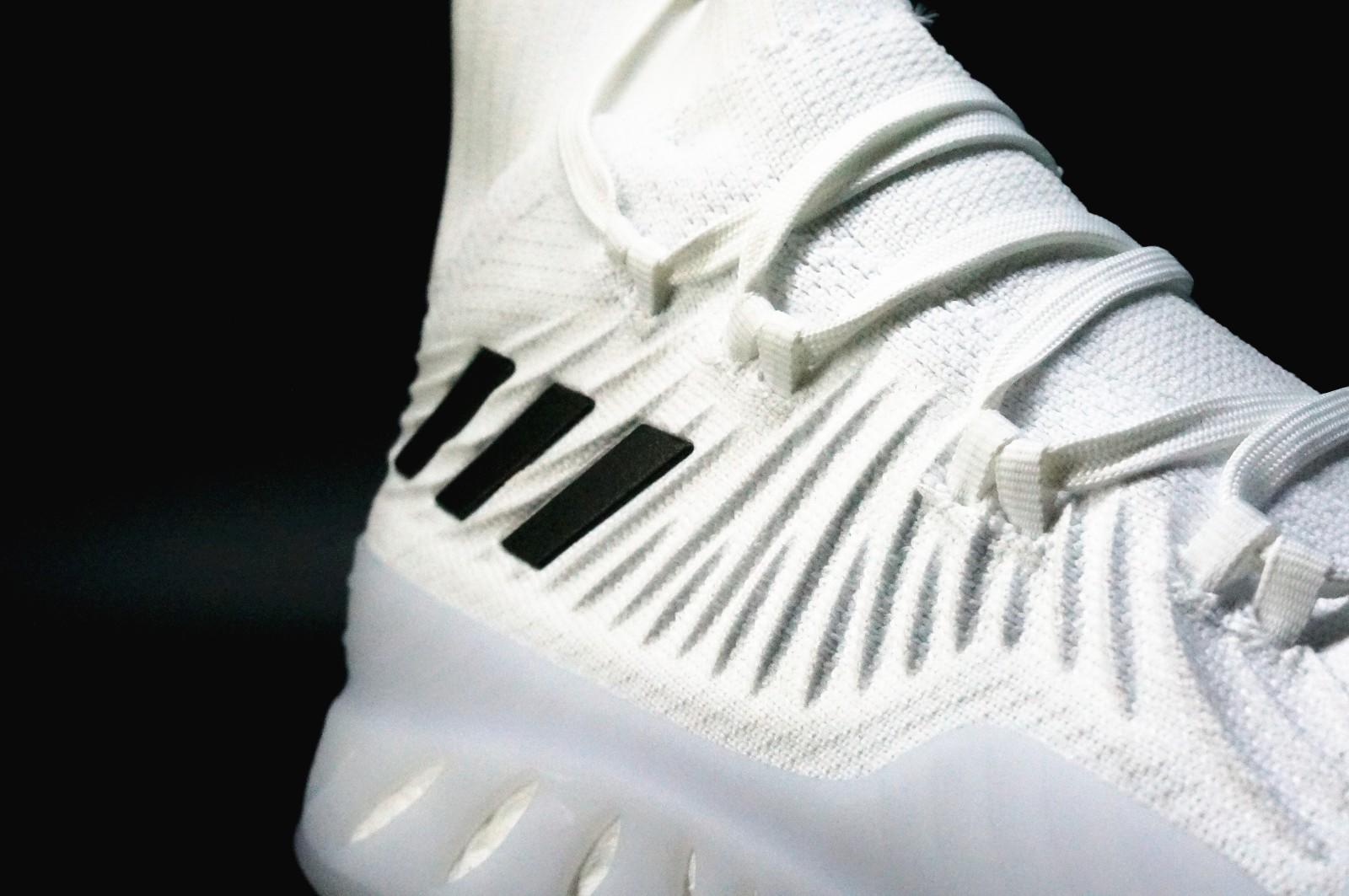 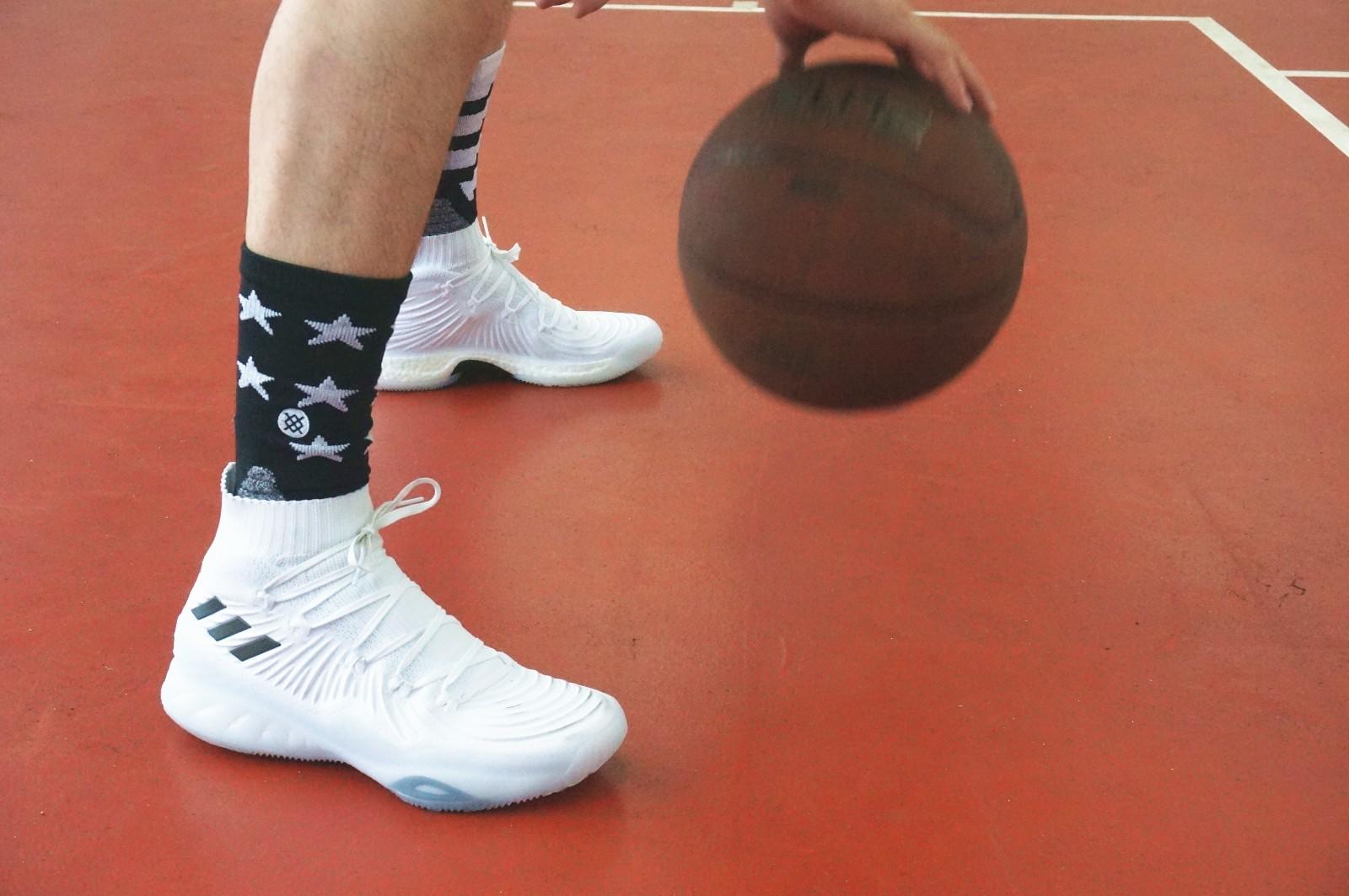 The biggest update to the new version is the one-piece sock-like collar in favor of the more traditional tongue design of last year’s model.But the lockdown will be great for this design as usually. 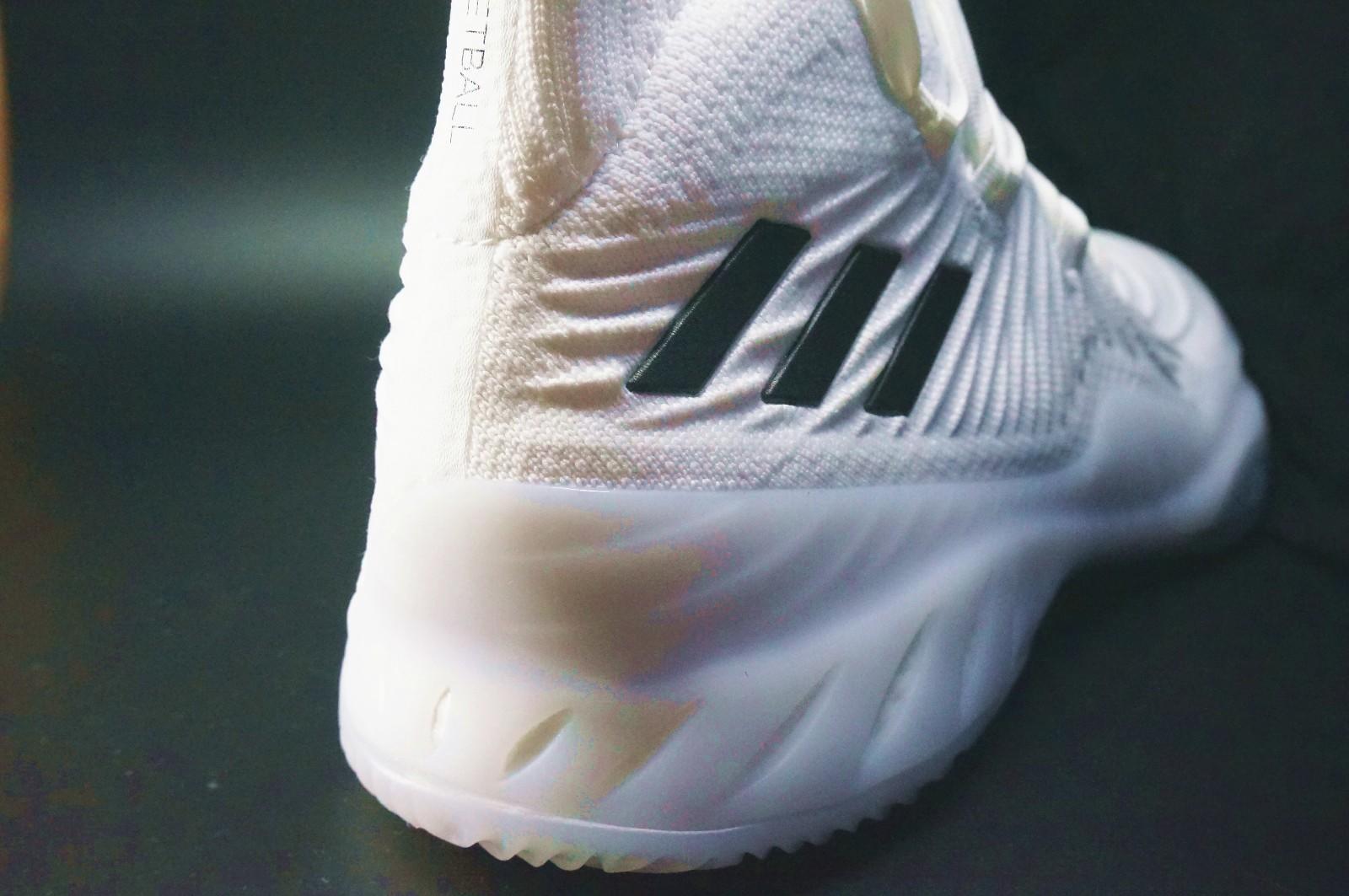 For the supporting : At first glance ,the sock design just there for proprioception only but only the very top of the collar is sock like so you do get a touch of support if you call padding support.  And there is a TPU supporting of heel. 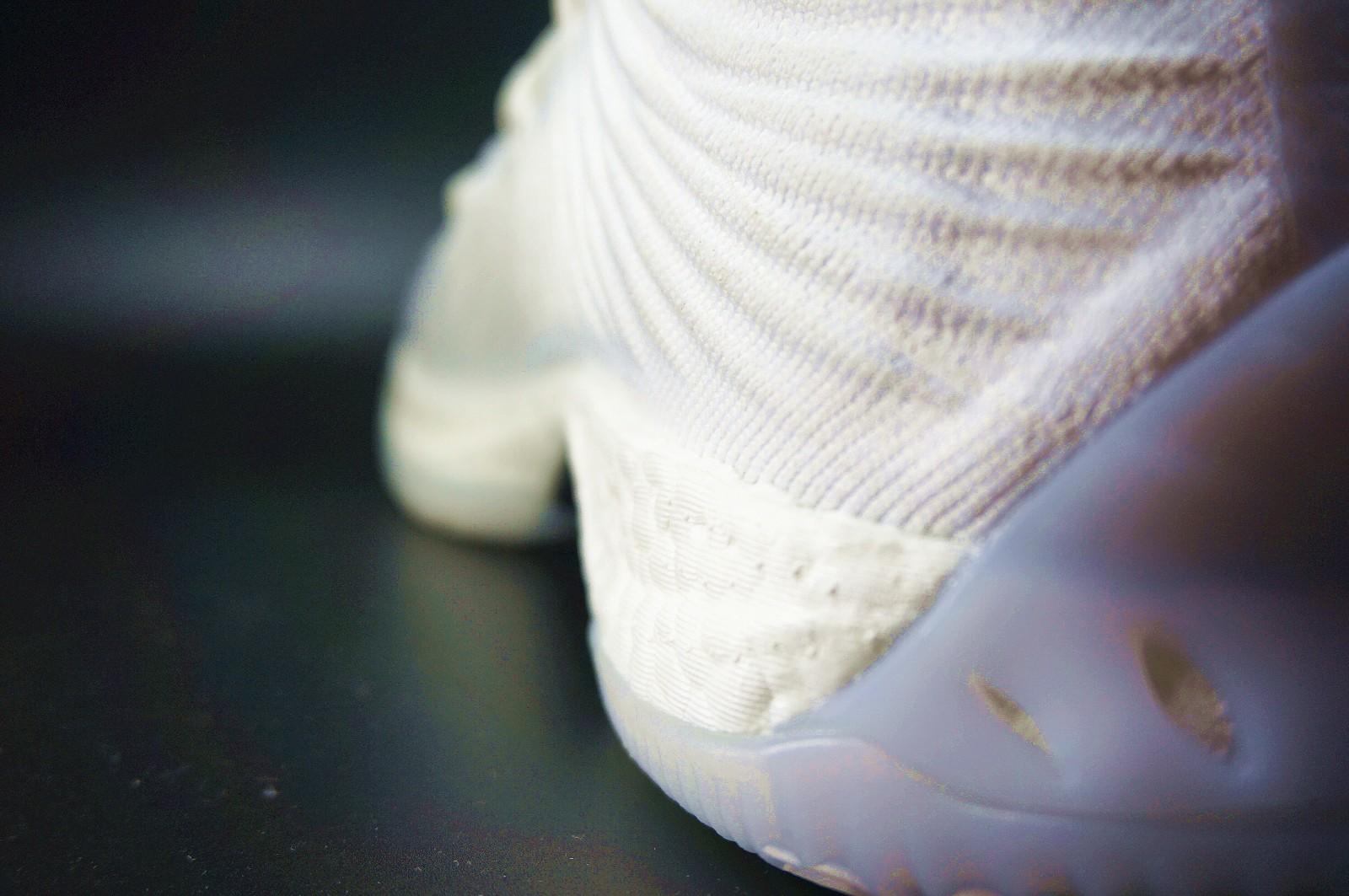 Here is the gif picture that I tested .I felt Crazy Explosive 2017  is comparable and stability than Rose 7, but the protection of the ankle will be less due to the upper material of the shoe.

For the cushioning:The thickest BOOST midsole offers unbelievable amount of bounciness for that pillow like ride.I felt the cushioning of the shoes is very responsive, and the heel part are more protection and  soft.So even you playing fast , you have been not felt hurt .

BOOST cushioning is covered with rubbery cage to improve stability and receive direct energy straight to your foot. While the inner side of the BOOST midsole is completely open to receive that full potential of the BOOST power. 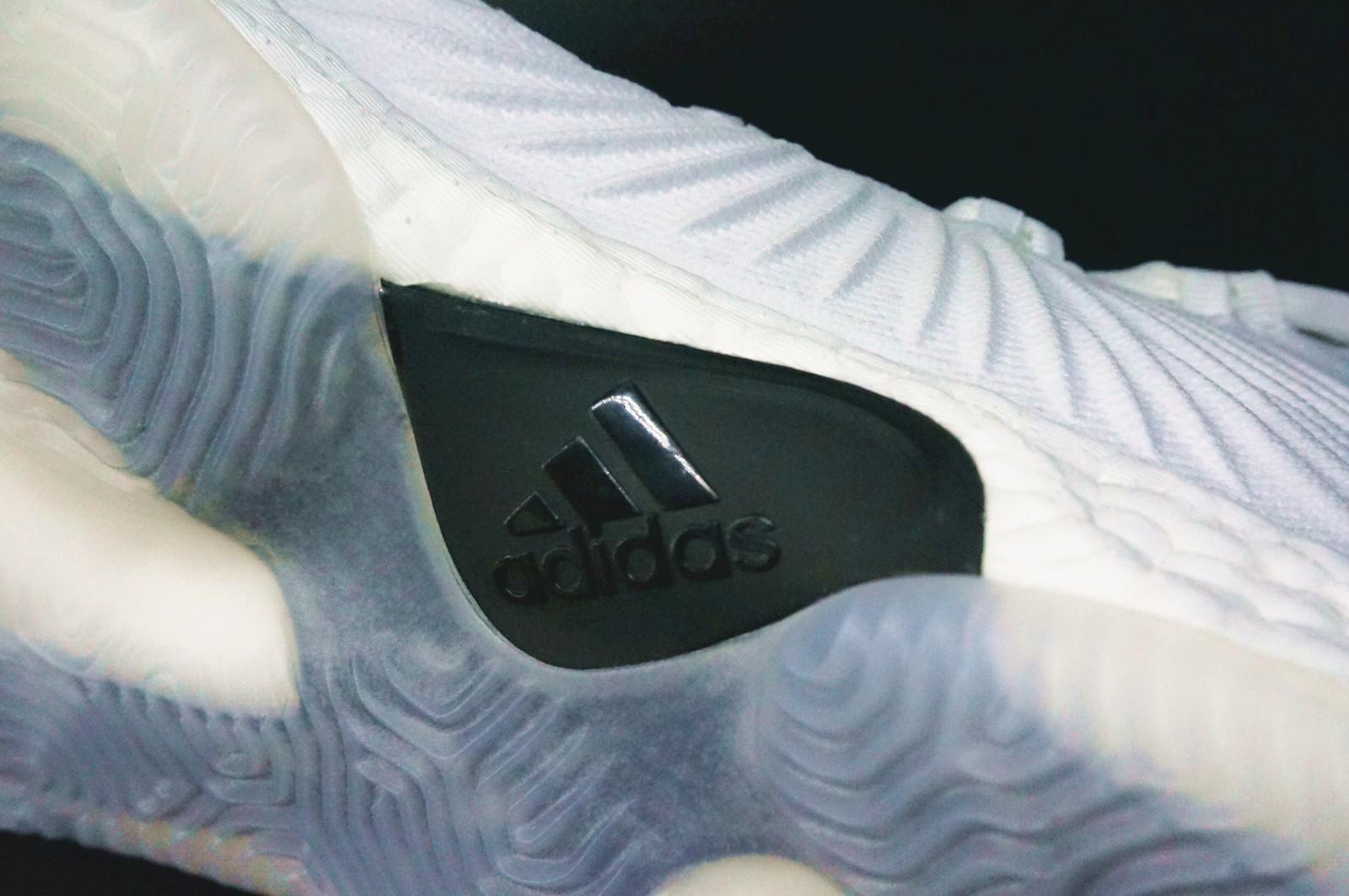 For the traction, it is used a great rubber but not easy to keep clean.

The same design  “8-word TPU support plate” as the previous version was followed, which is excellent in anti-torsion and ensuring that Boost provide supporting. The Crazy Explosive 2017 PK also adds an additional TPU support module on the outside to increase the side stability. 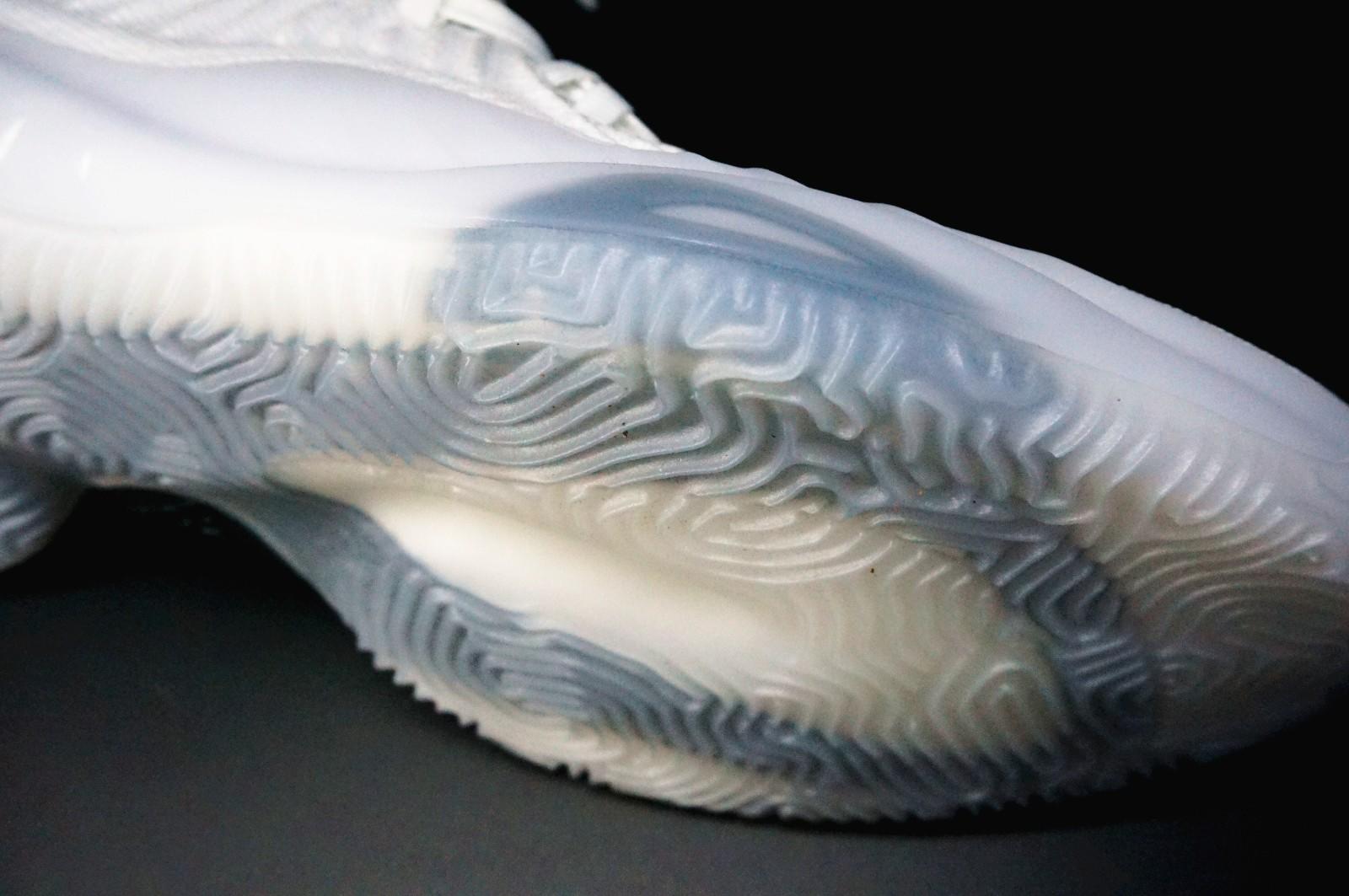 Again, there is a gif picture as below :

The Crazy Explosive 2017 fits exactly the same as the last year’s model. They look quite wide and bulky, but actually it is a true size. you can buy the  normal size that you bought before. 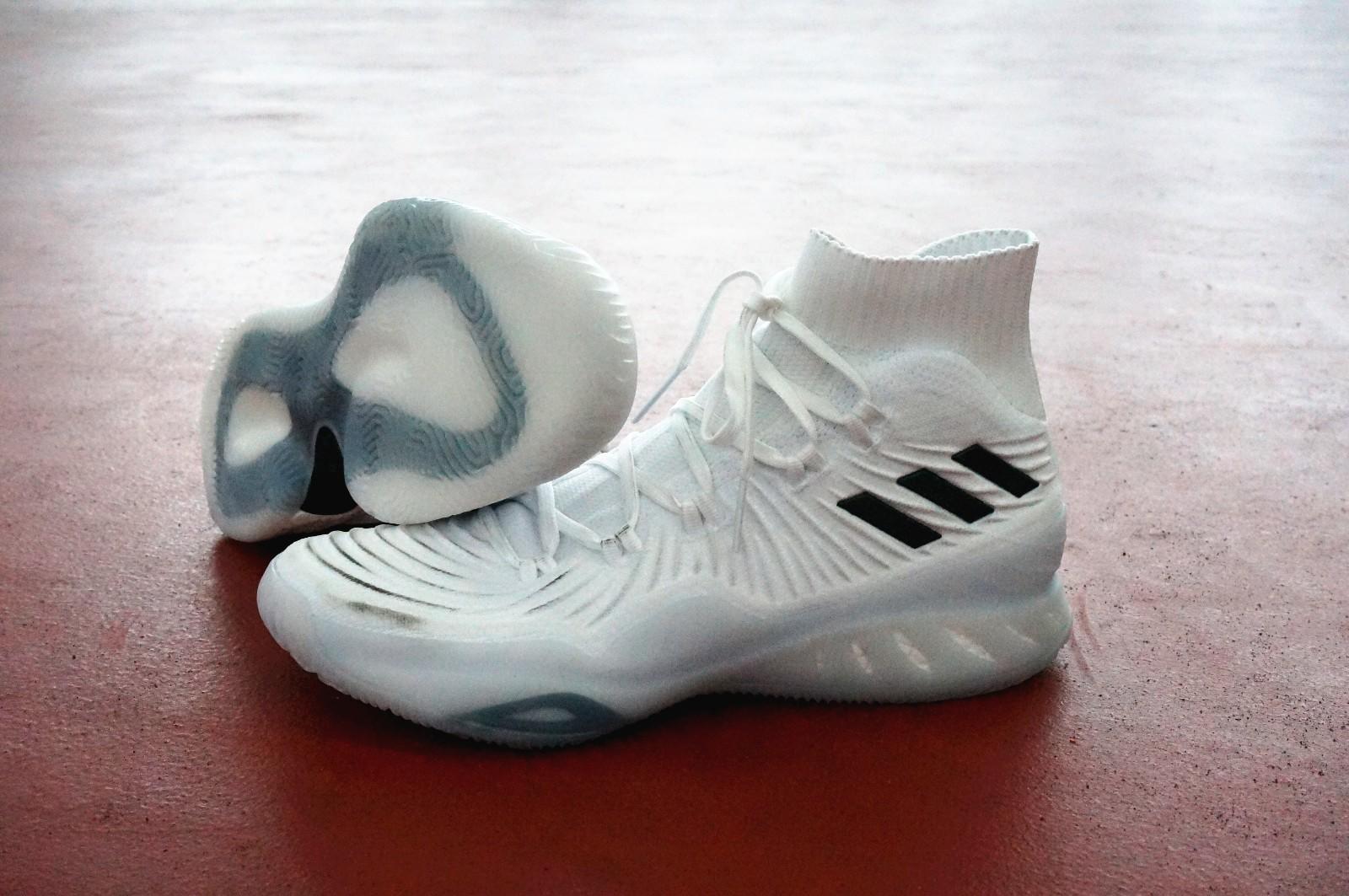 Overall, Super responsive BOOST cushion,great traction, solid foot containment will let you to do anything on court with confidence and efficiency.