After introducing the Kyrie Flytrap earlier this year, Nike continues to expand Kyrie Irving’s signature line with the first ever low-top variation of his model. After released the the Kyrie 4, the affordable “Flytrap” ,then the latest “Kyrie Low” low-profile basketball series for summer. 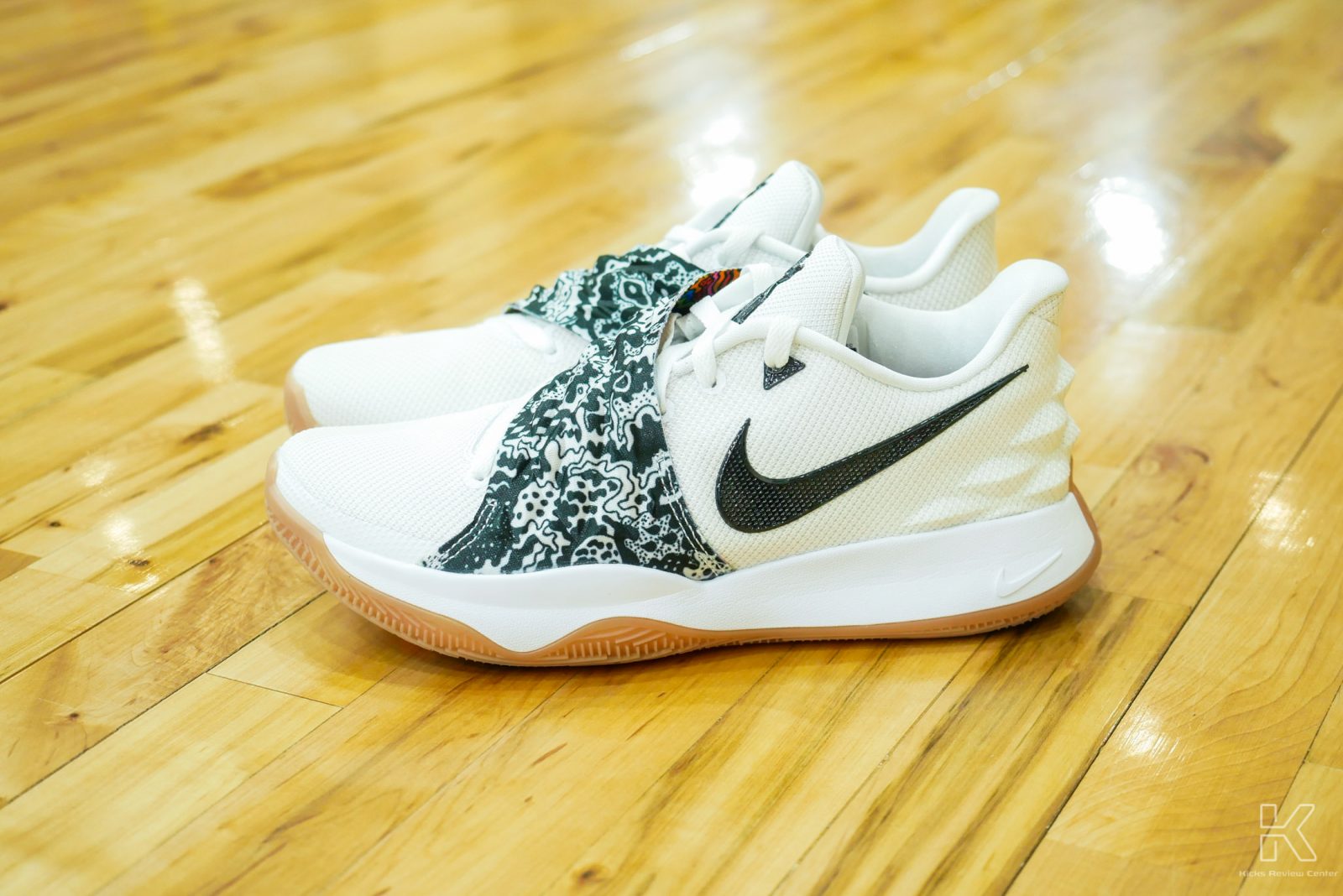 This particular colorway features a black and white strap in graphic print and a gum rubber outsole that features herringbone-patterned nubs, blade. 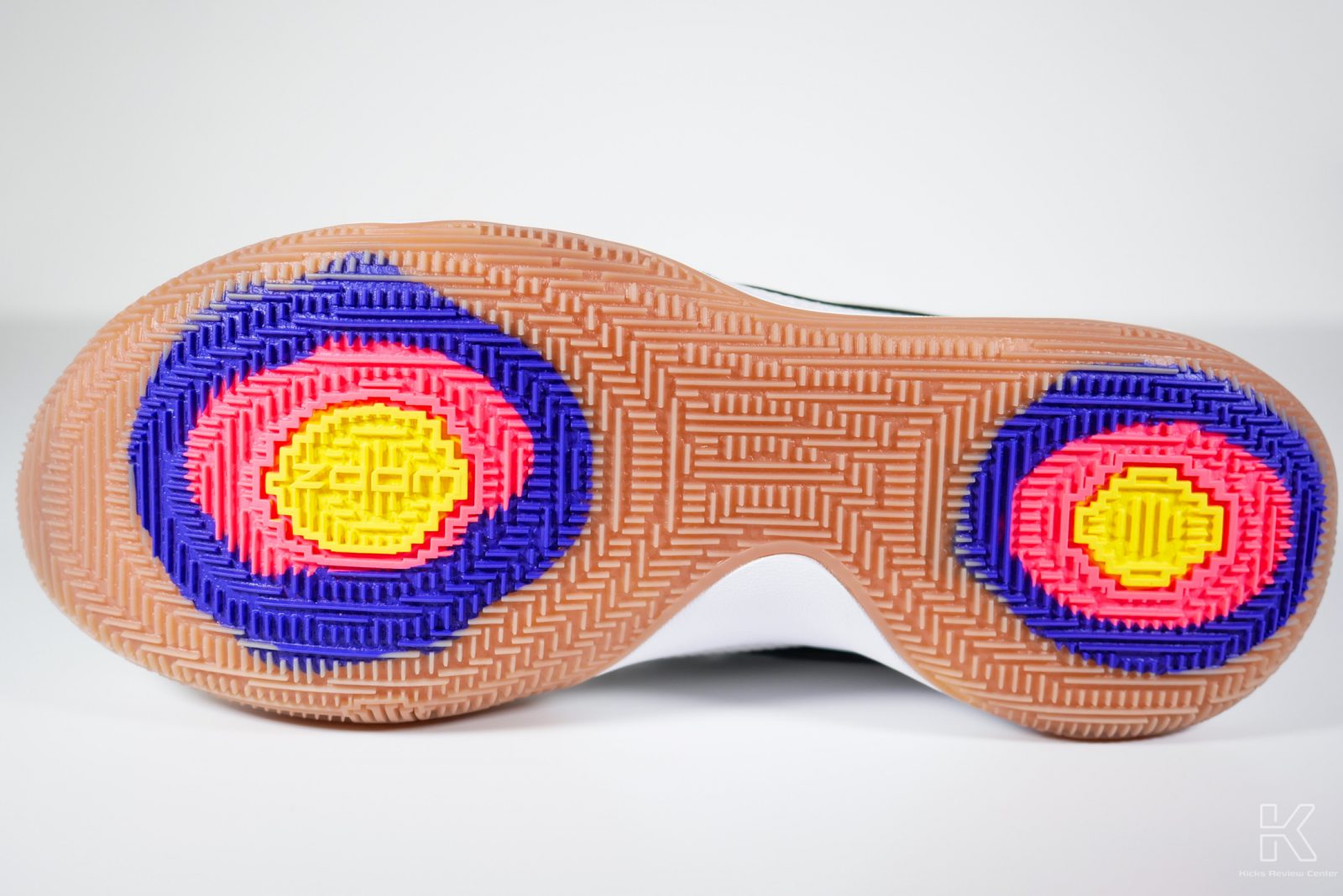 Kyrie Low’s outsole style is a line of straight and horizontal stripes, with a large area of gum rubber, and a little general rubber material (the red inner ring and yellow area of the color).Then in the forefoot area and outer sides have a design that extends to the midsole, which increases the grip area of the feet. 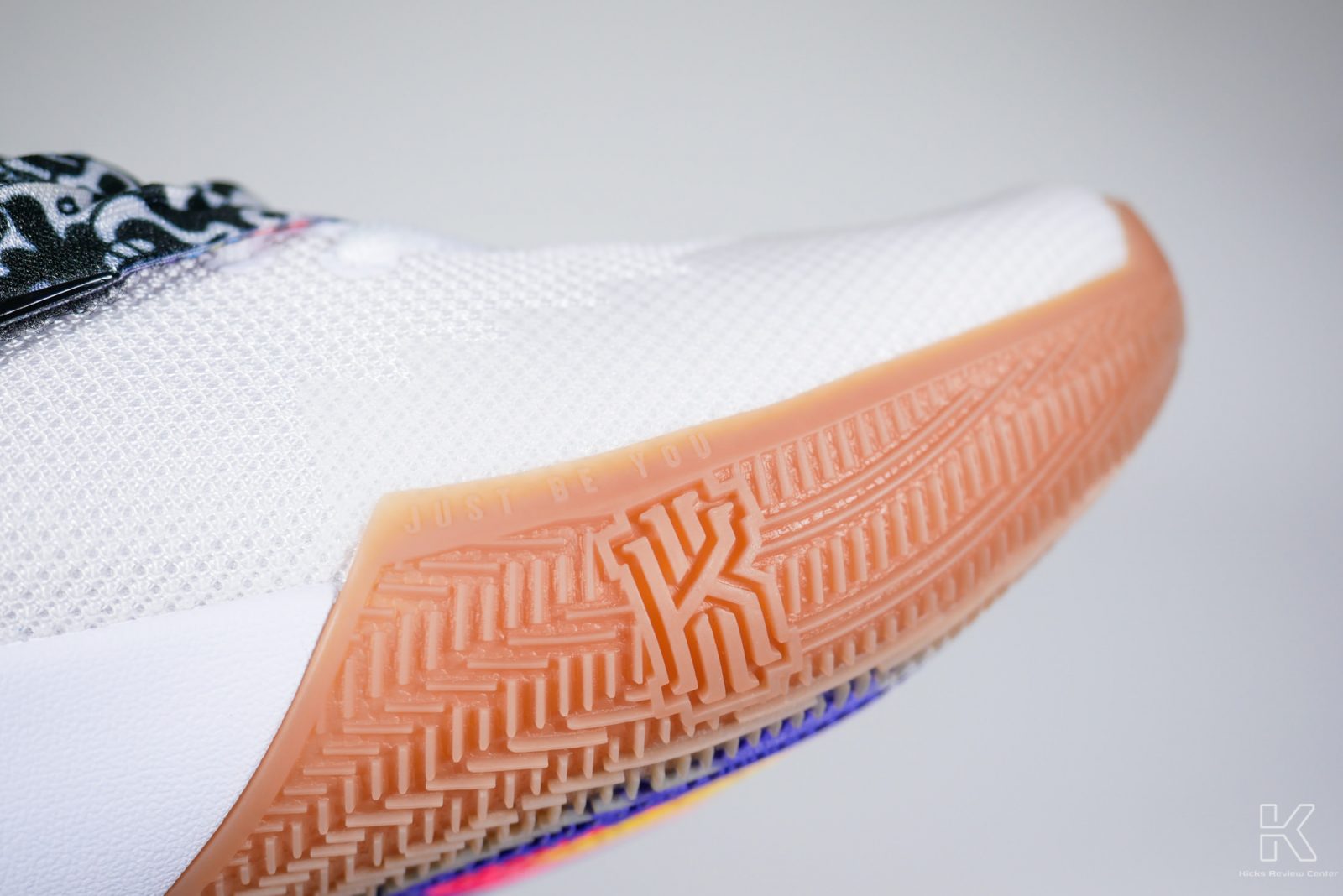 Still maintaining the good tradition of the “Kyrie” series, the grip is great, the outsole  enhanced the friction, so the grip is nice . And the multi-directional lines between the vertical and the horizontal also make the grip more stable and will not Different footsteps occur in which the grip is inconsistent. 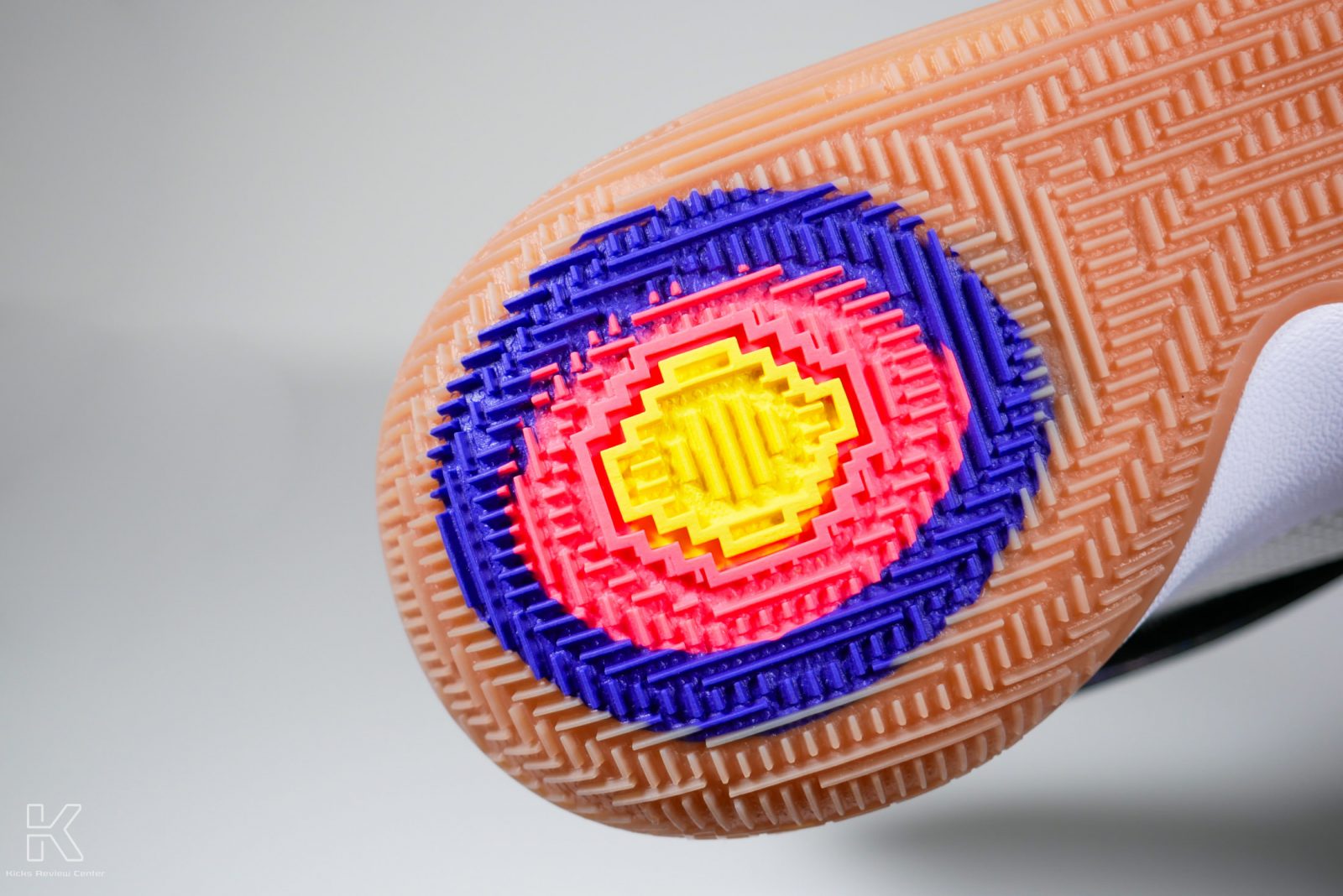 The first Kyrie basketball shoes with front and rear soles, Zoom Air, and Phylon midsole. Although the number of air cushions is “upgraded”, it is estimated from the price that it should be a Zoom Air (a hexagonal air cushion similar to Kyrie Flytrap) with a small pocket of Zoom Air and a small foot of the foot. 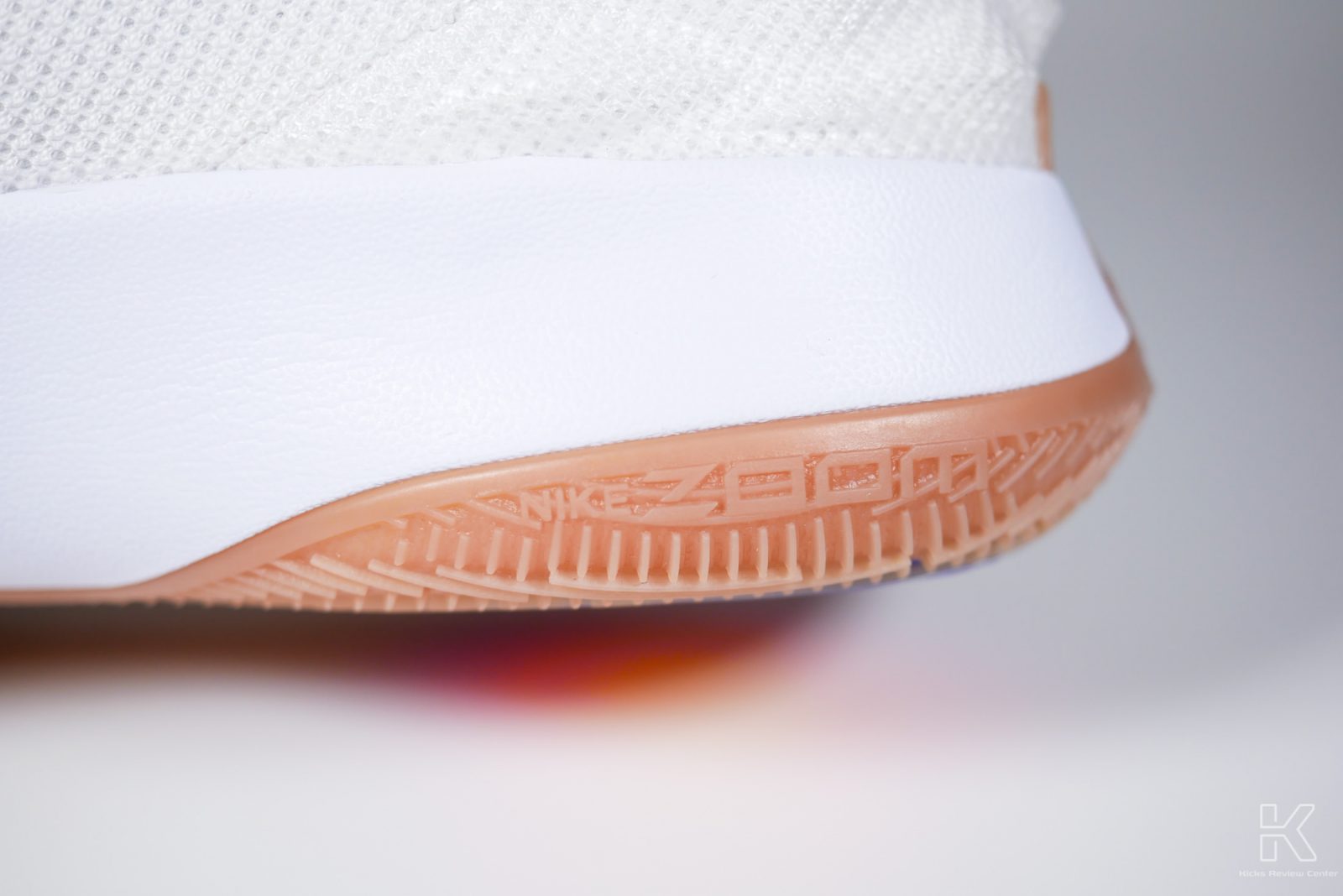 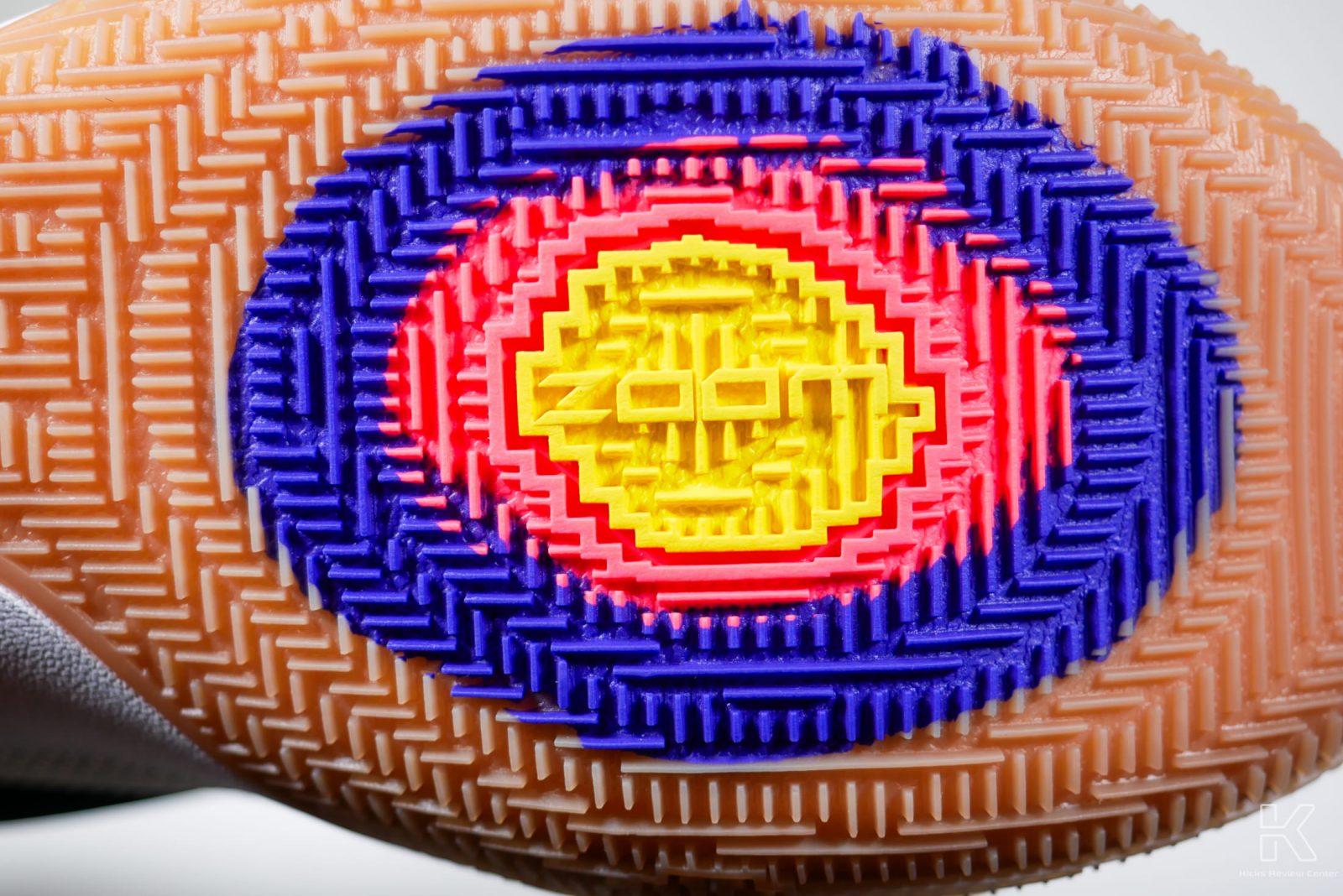 It is a pity that the large-scale Phylon in the midsole is still  stiff but density, and Zoom Air adopts the “lower” type, which is placed near the bottom of the Phylon bottom, and the overall foot feels  not good .I can not felt the Zoom Air ,there is not the responsive and feedback .I just feeling it is the same with Kyrie 3. 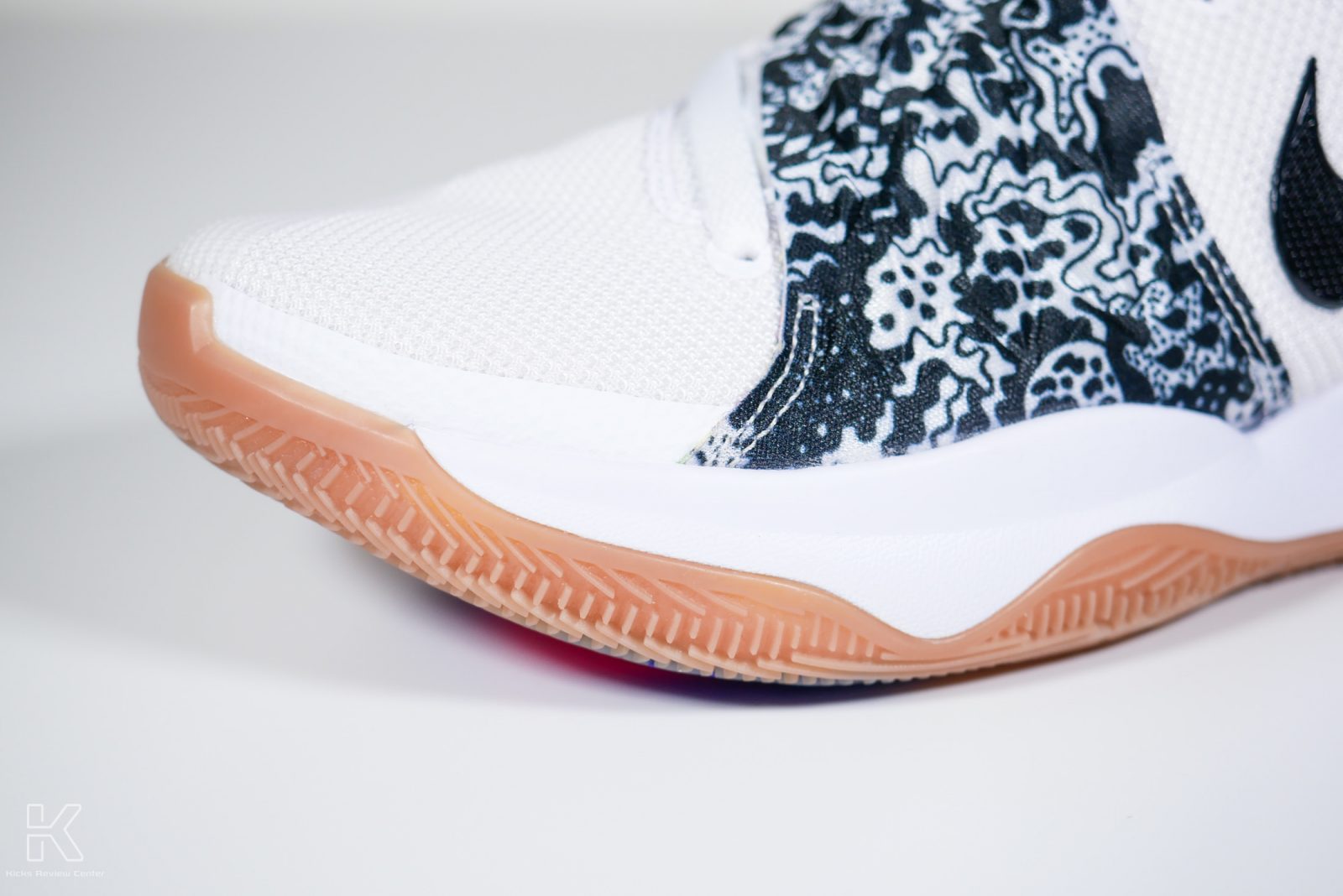 The Zoom Air  just like its siblings, Nike Zoom is lightweight and durable.As we know , the Zoom Air  brings the foot closer to the ground and enhances stability, especially during quick cuts and multi-directional movements.also Zoom air can increases the performance of the reaction. Since Zoom Air is closer to the outsole, there is no common Zoom Air under the insole. So maybe you can’t felt a lot zoom air in forefoot. 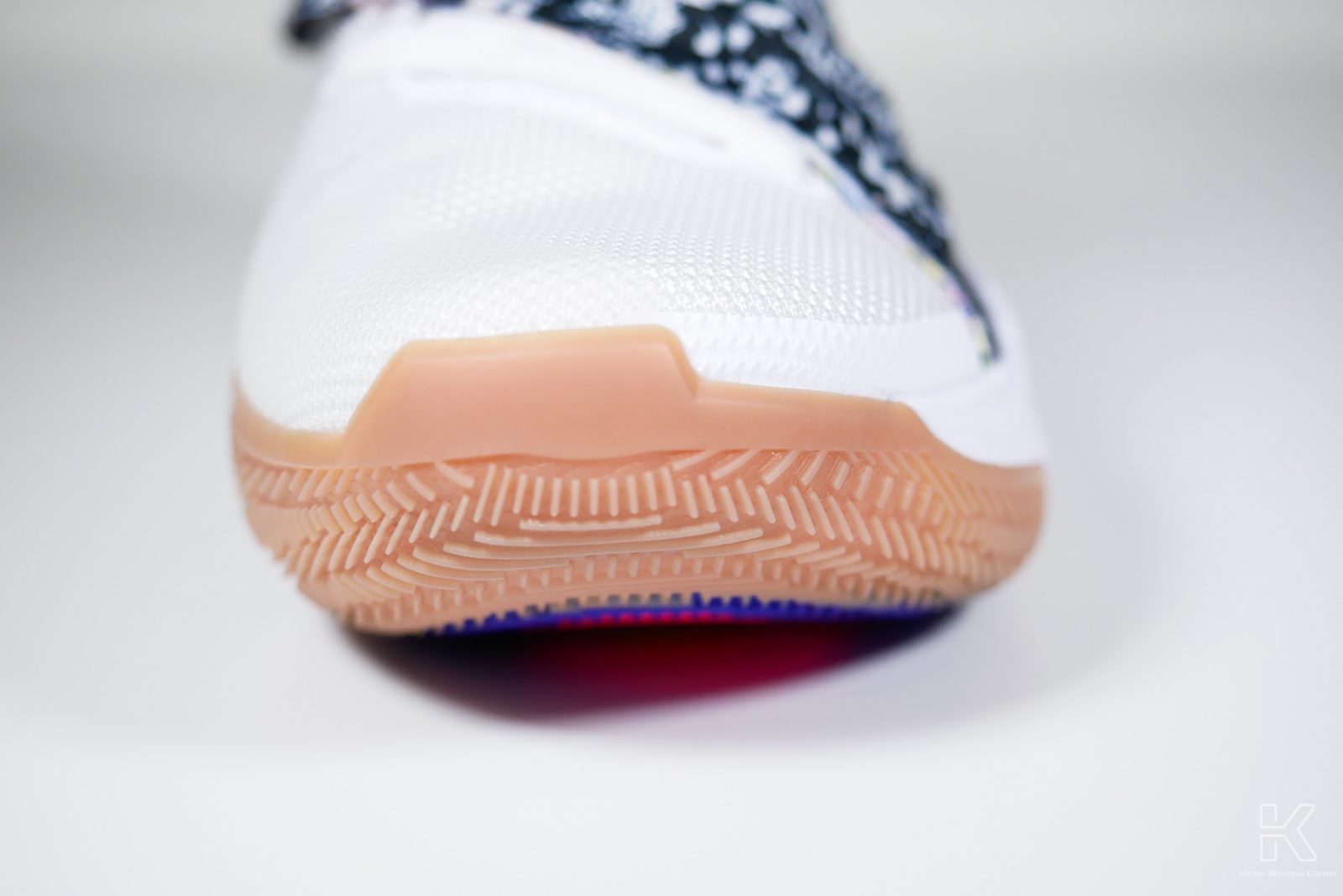 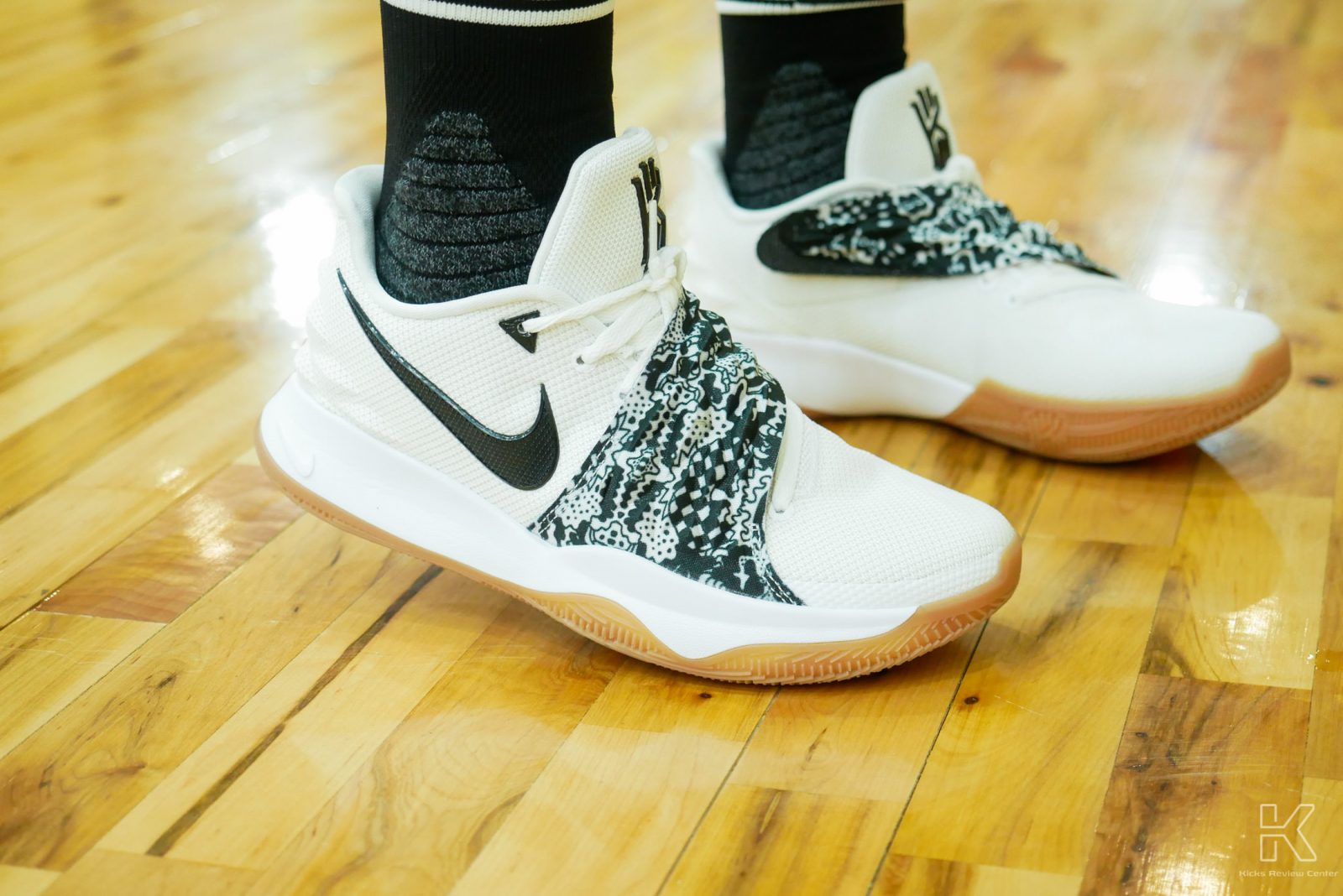 Although Kyrie Low design adopt some elements from Kyrie 1 to Kyrie 4, it is look like the Kyrie 3 if we moved the strap,as well as the upper material.The Kyrie  4 low just followed the Kyrie 3 , the material with mesh which  added fuse coating on the inside of the forefoot.

A shoe lace system is the highlight this time, so that the Kyrie  4 Low can  fit  tightly, the position of the collar and the heel  which added a thick lining filler , all of the design are add the lockdown 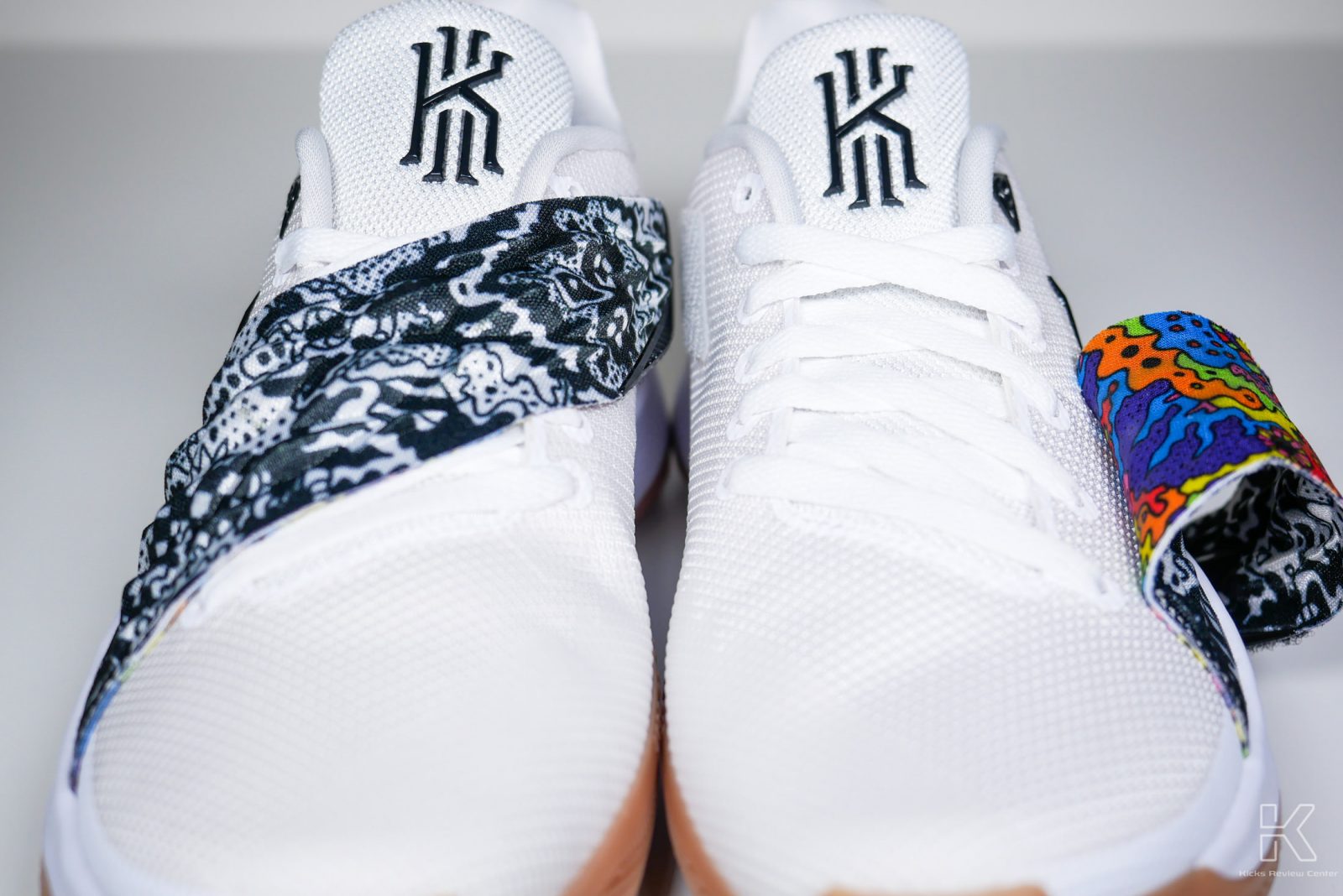 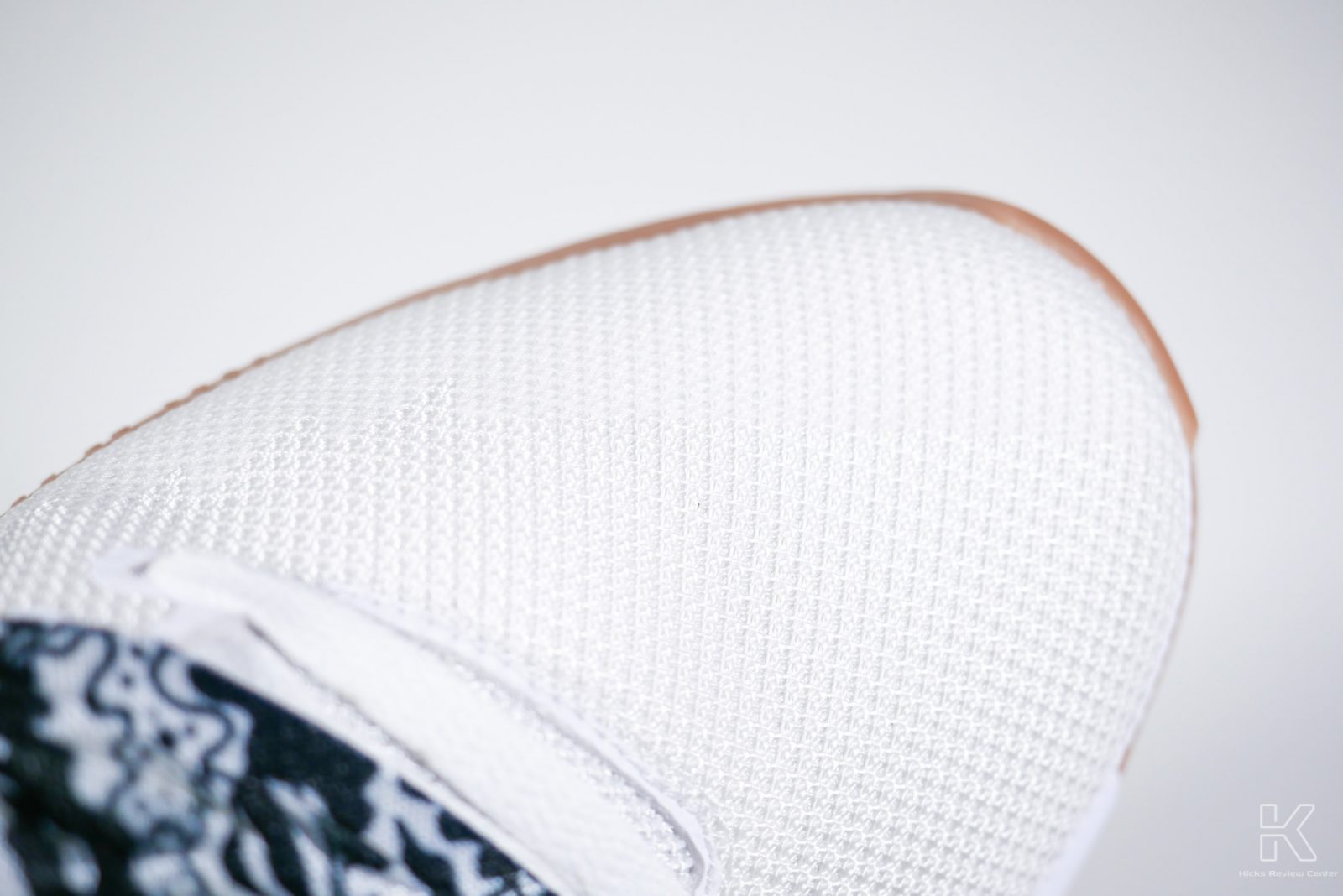 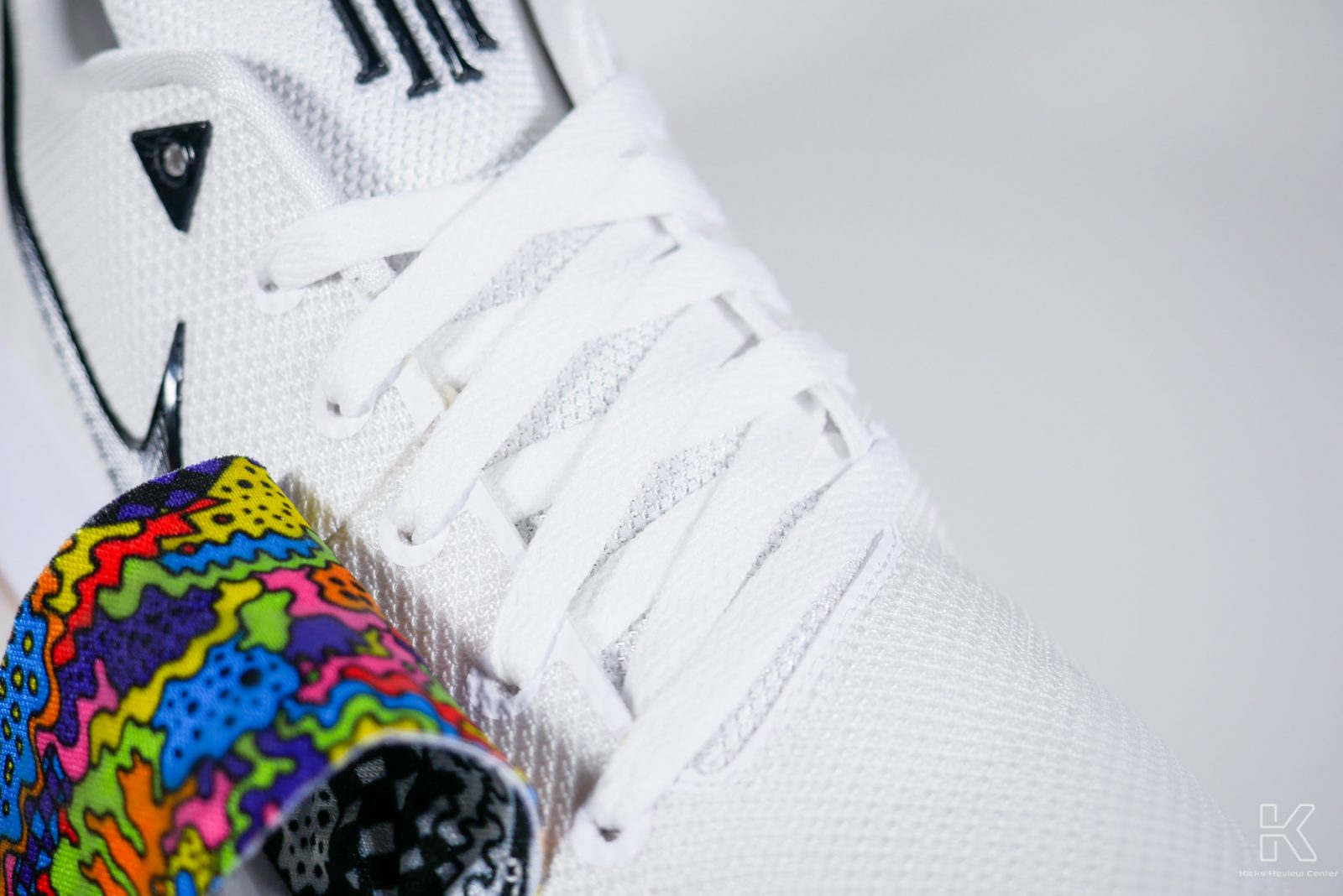 Mesh materials can not provide the  excellent upper support performance, but Kyrie Low has added Kyrie 2’s adhesive strap  to enhance the support strength and ensure that the feet do not slide inside the shoes. 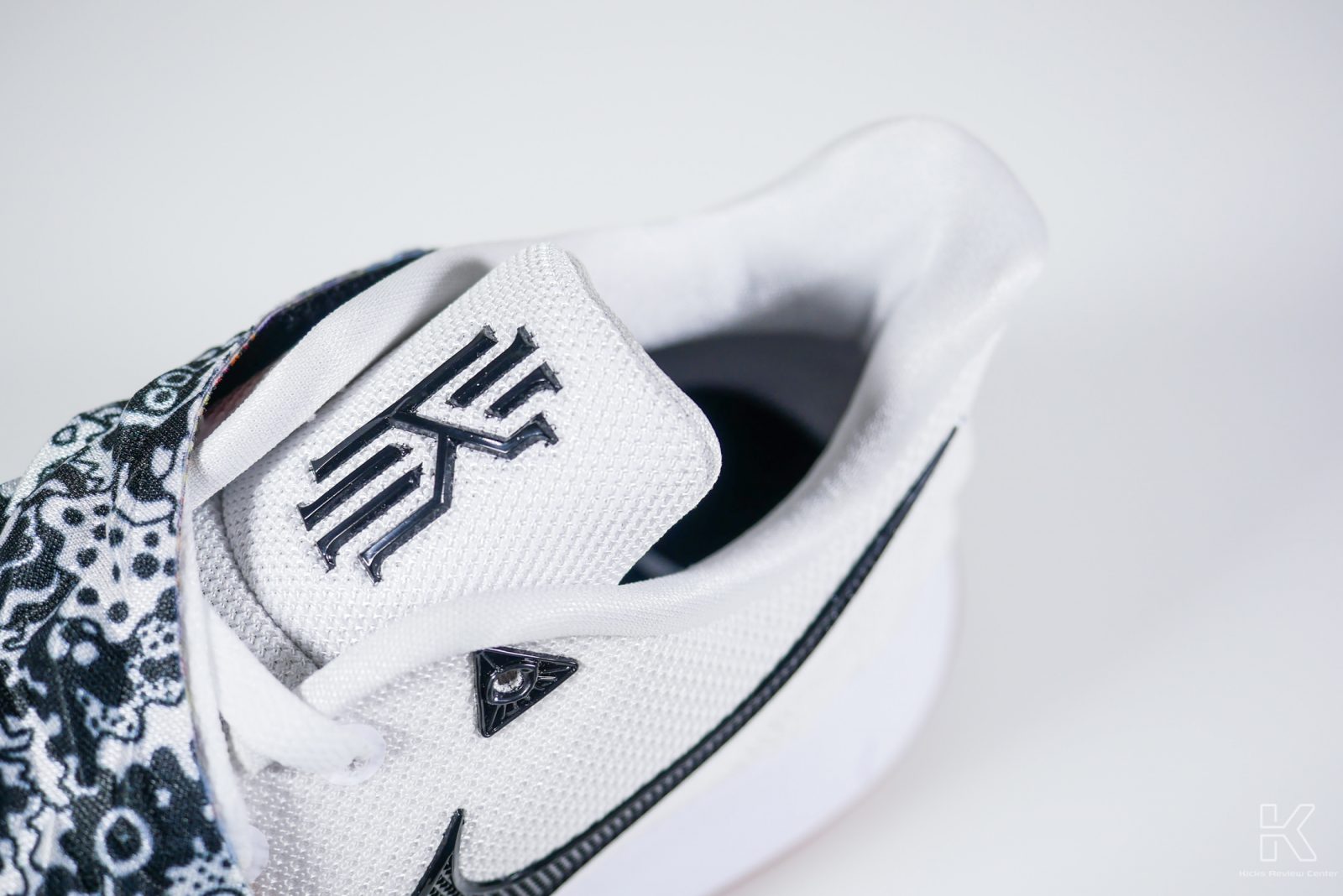 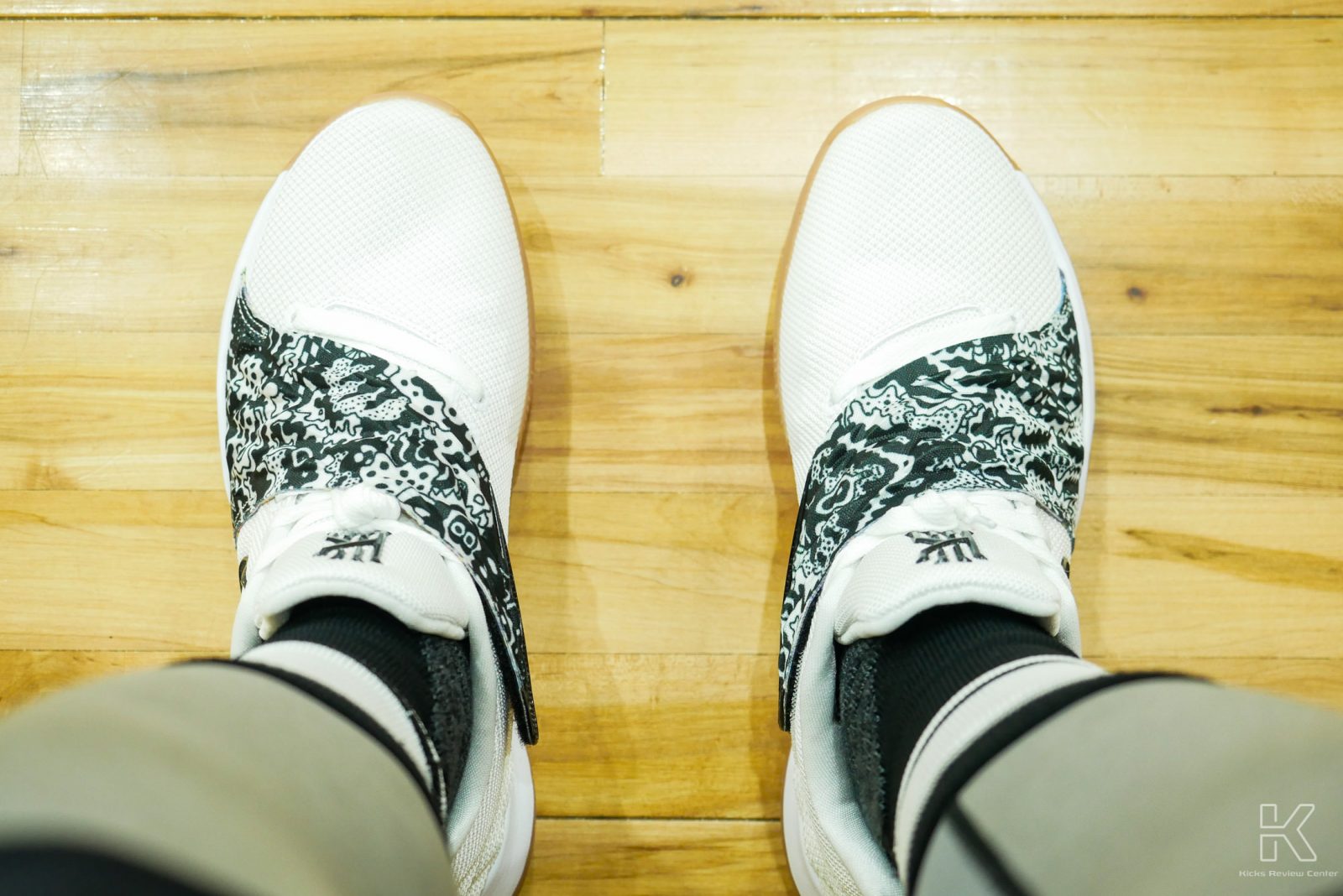 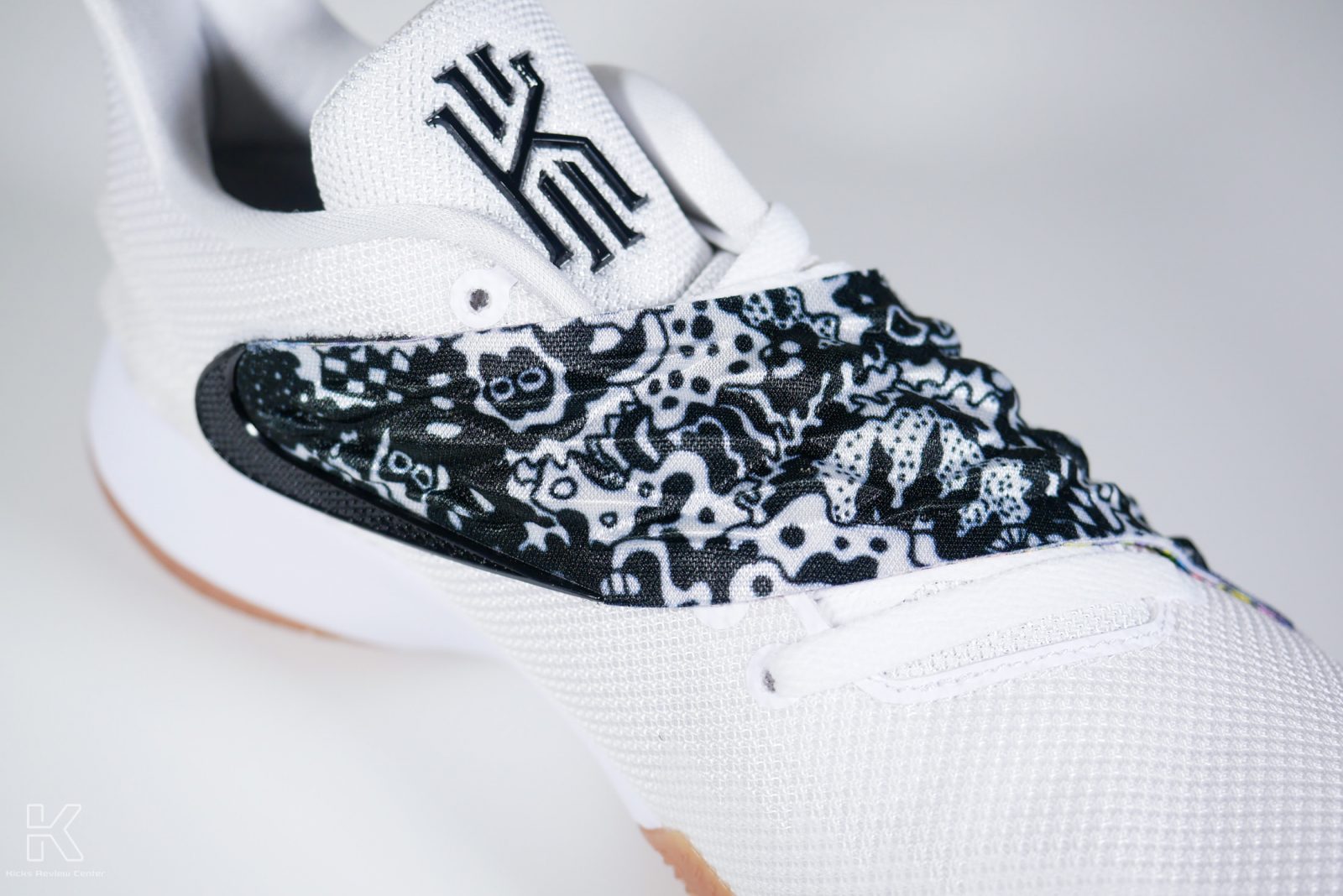 Kyrie Low is an engineered version of Engineered Performance , meaning that the forefoot area is wider than the European and American versions. Kyrie Low, I think the front area is too wide, resulting in too much extra space between the upper and the toe, or the length, so you c an buy the small a half  size , but it will feel the width of the feet compared to the outside. 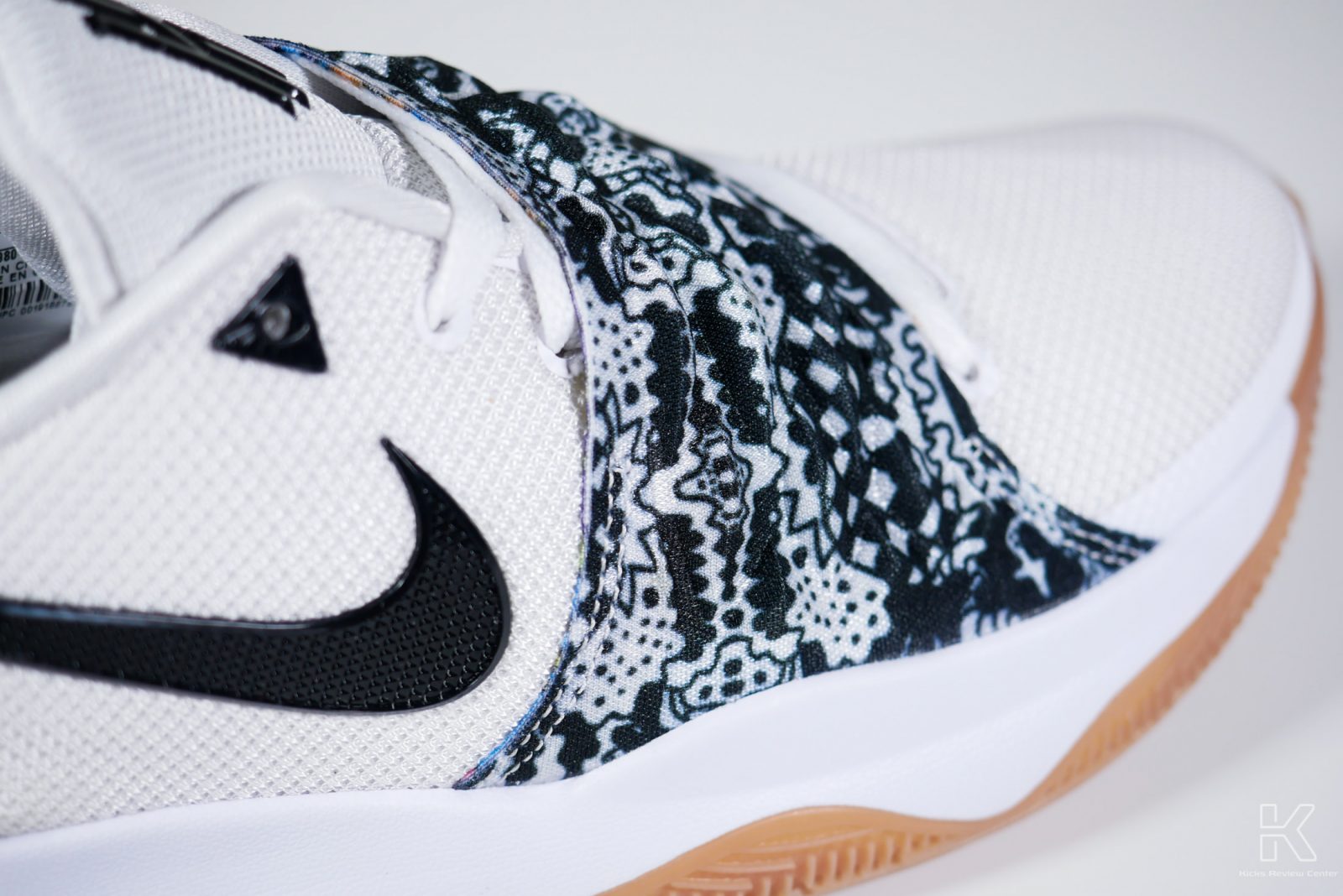 The midfoot strap placed on this sneaker is nearly identical to that of the Kyrie 2 and the outsole of the sneaker features a colorscheme very reminiscent of the heat/pressure map design applied to the Kyrie 3. 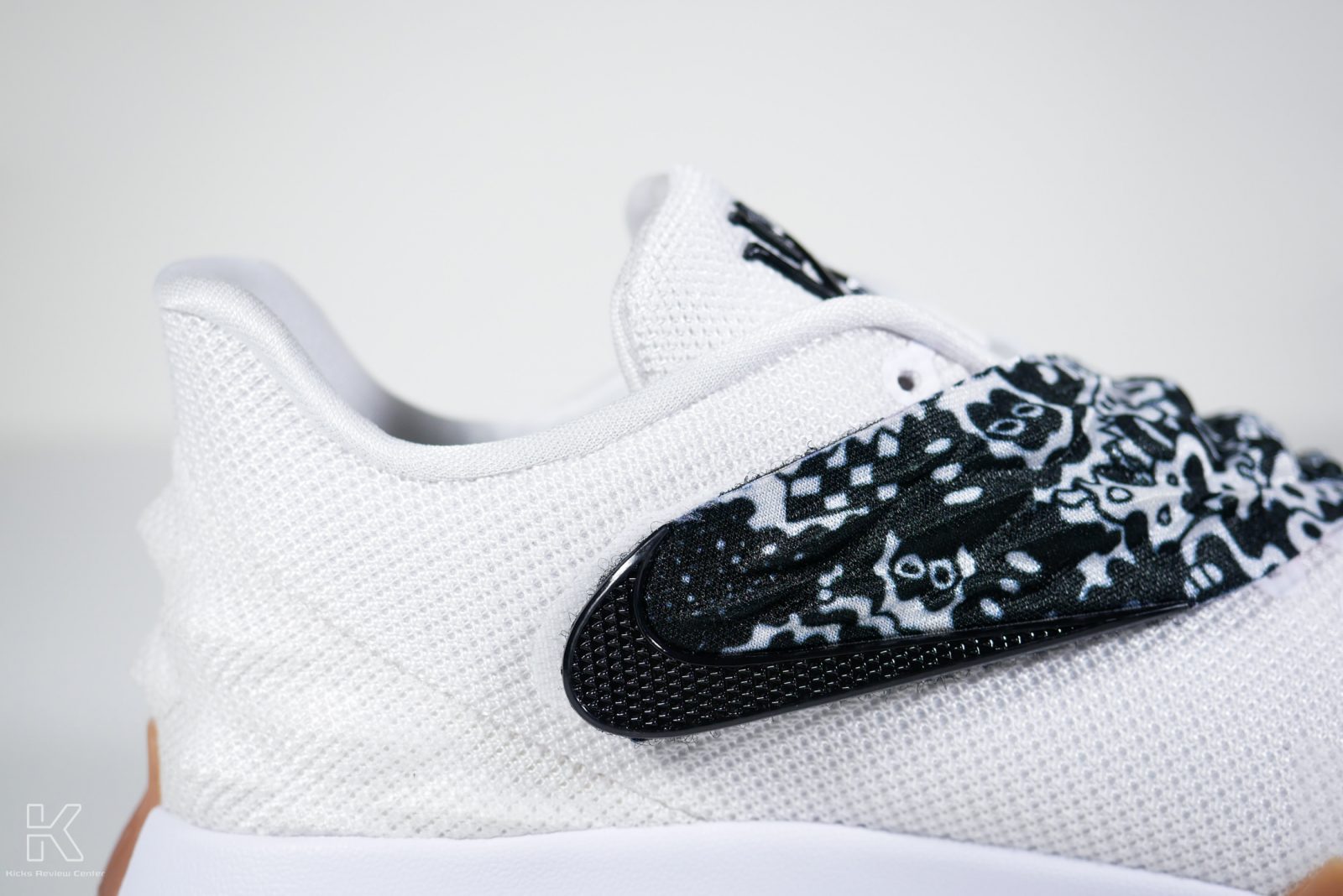 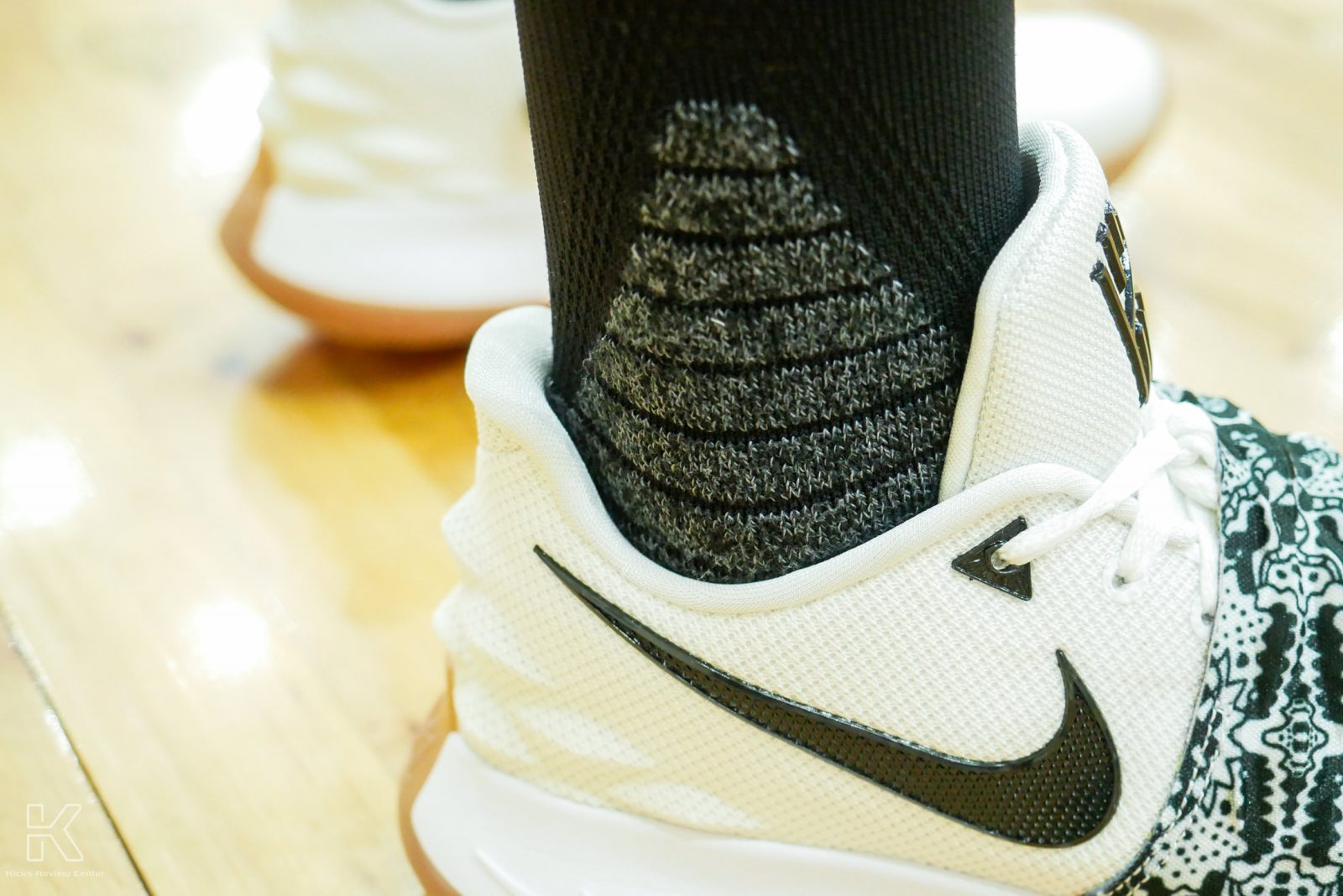 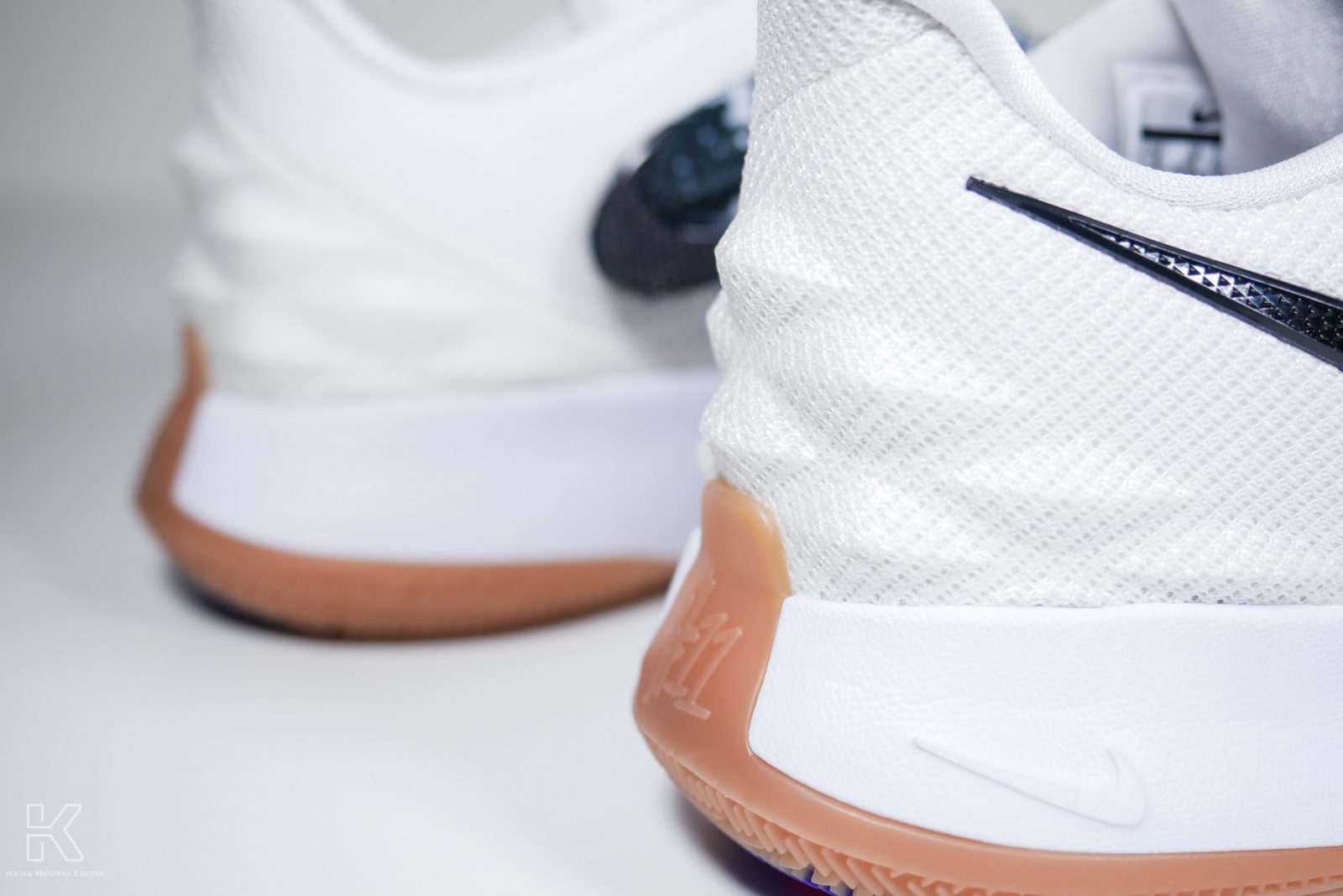 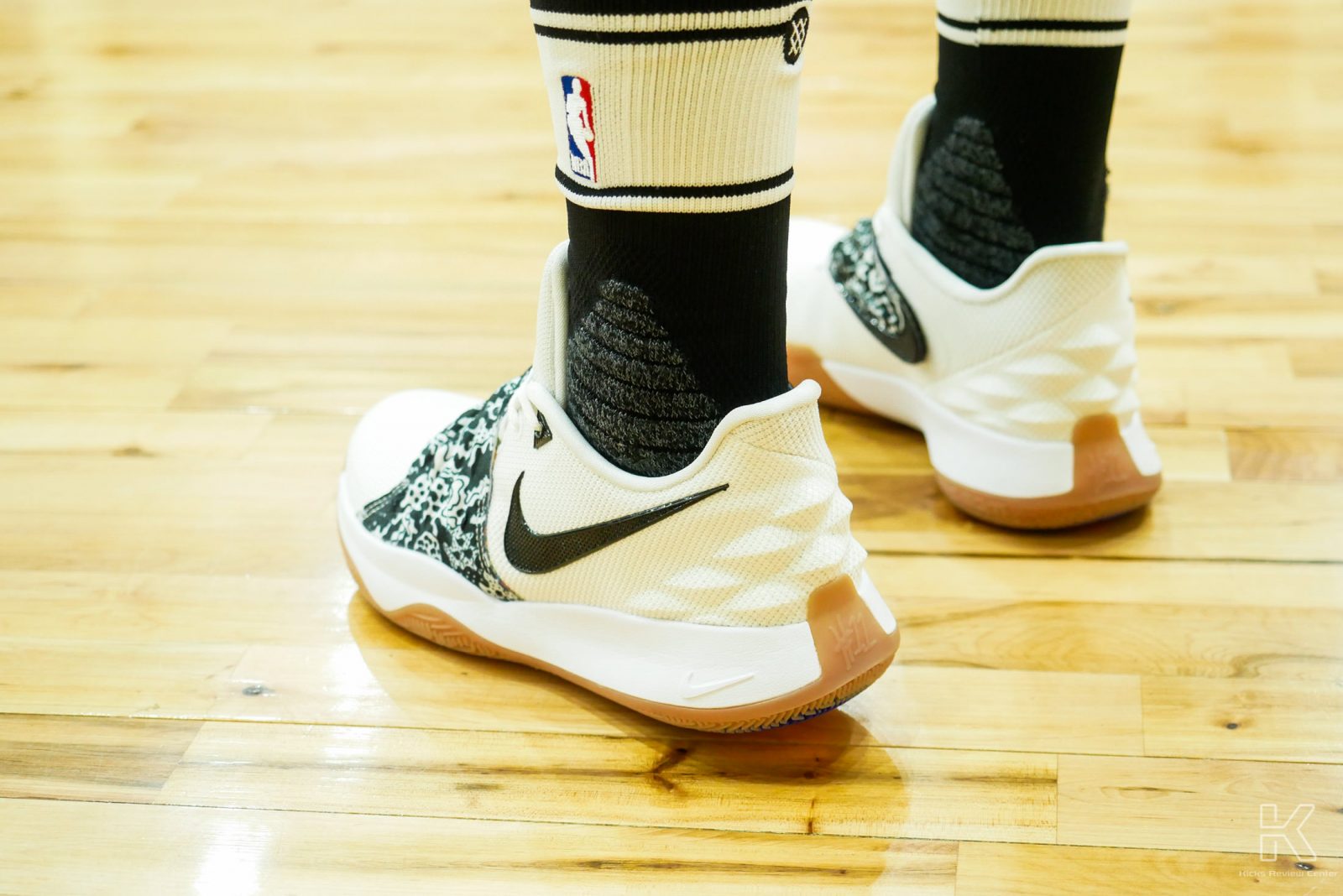 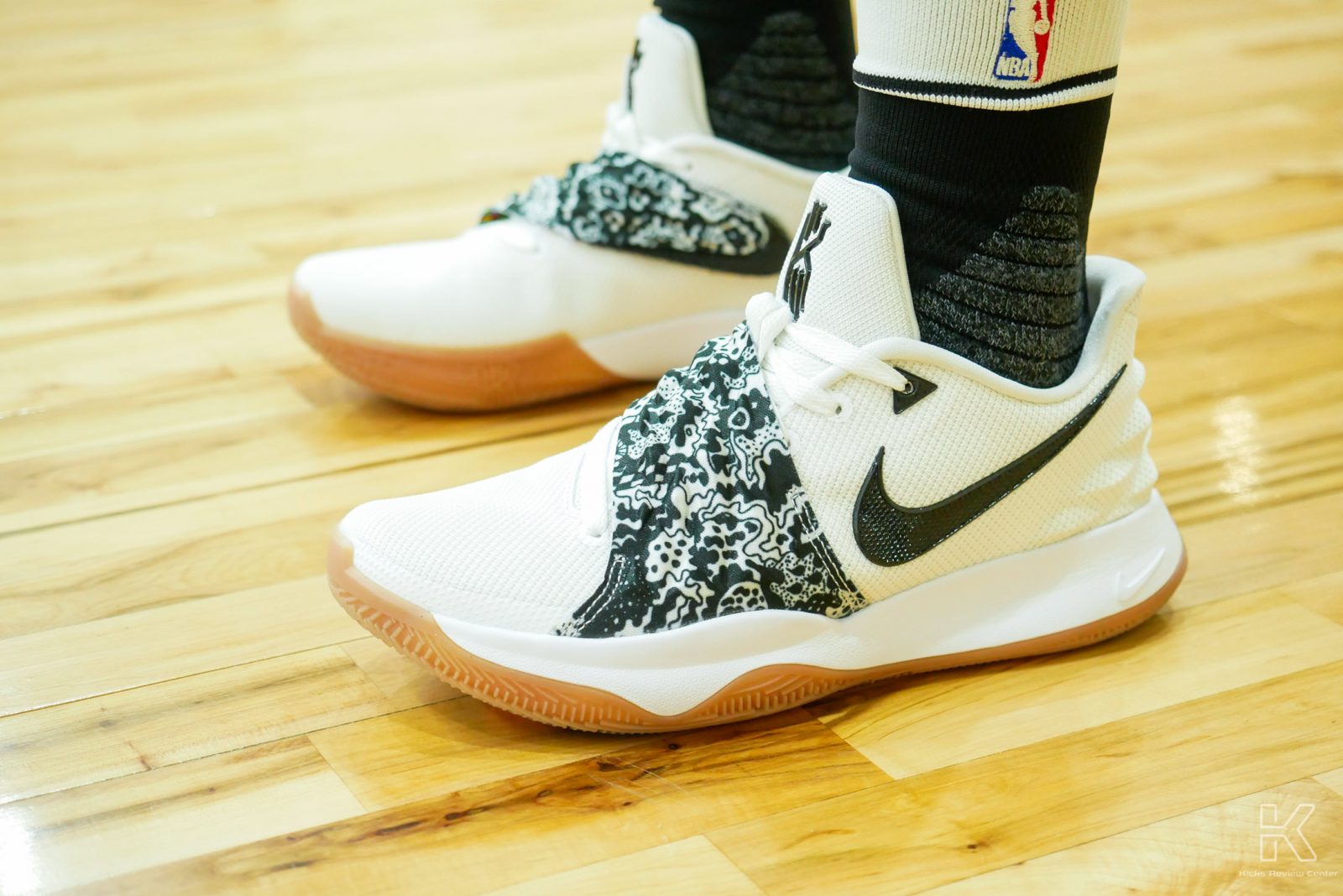 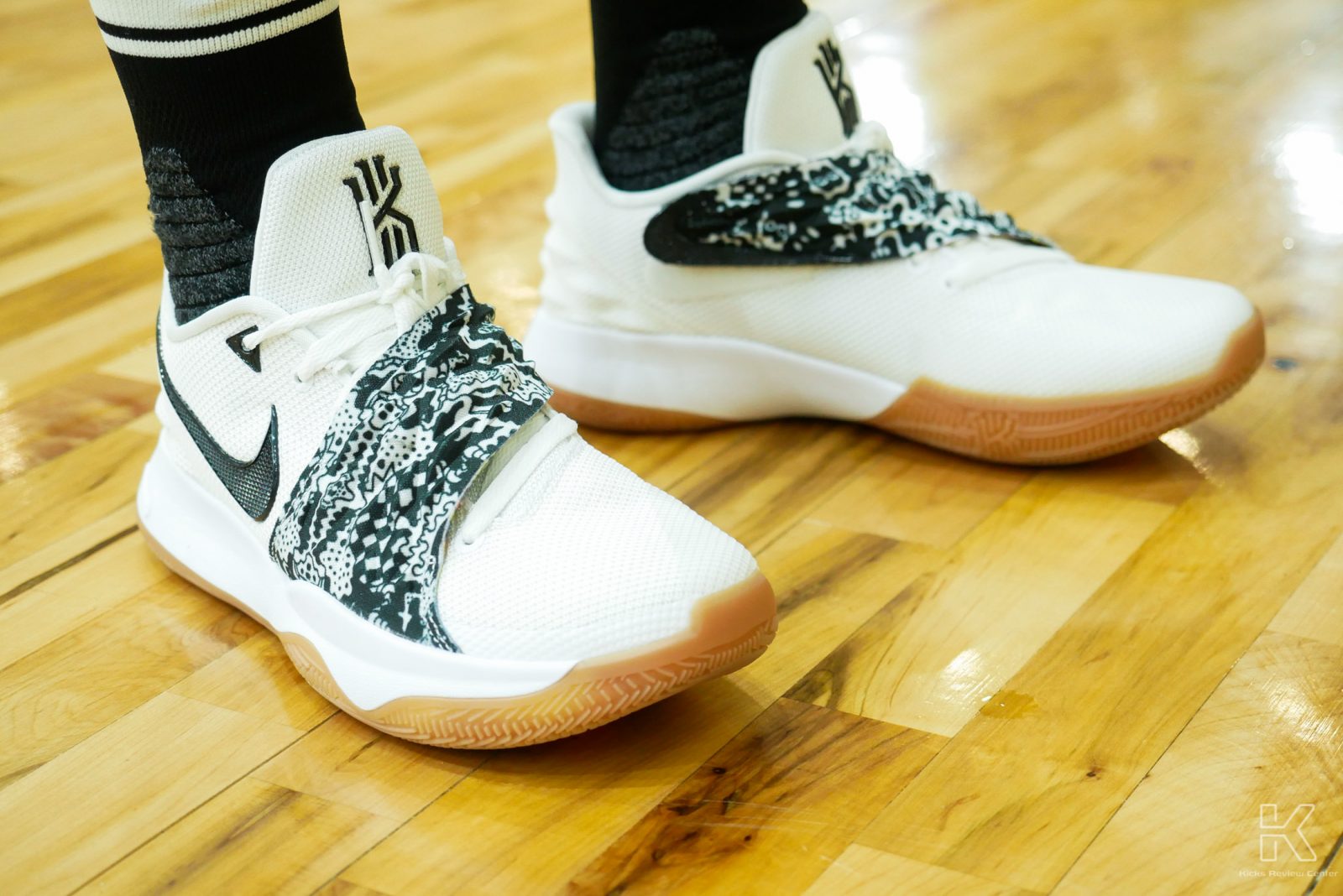 Overall ,Kyrie Low is followed the Kyrie 3 with improved  flexibility. Although the support and coverage of the shoe is slightly worse than that of the Kyrie 3, but the strap just make it up.

Unfortunately, it also inherits the shortcomings of the Kyrie series (except for Kyrie 4). The mid-bottom “Zoom Air” will be less than Kyrie 4 The  PG2 will be great for this price